Talk about an anticipated book. This one is unprecedented, one of the most awaited Jewish books in years. Rabbi Yechiel Spero has finally released his biography on Rav Mordechai Gifter, published by ArtScroll/Mesorah.

Born in Portsmouth, Virginia. Attended public school in Baltimore. Knew only one blatt Gemara at his bar mitzvah. Was this a Jewishly deprived American youngster?

Not at all. It was the world renowned gaon and rosh yeshiva, Rav Mordechai Gifter, rosh yeshivah of Telz and one of the world’s greatest Torah scholars and revered leaders. 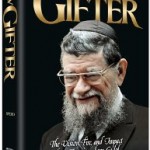 In this warm and anecdote-filled biography, Rabbi Spero introduces us to one of the most fascinating Torah giants of recent times. Rabbi Spero’s best-selling “Touched by . . . ” series has earned him many thousands of admiring readers. In this, his first biography, he outdoes himself.

To Rav Gifter, every minute of Torah was a precious gift. His intense and successful effort to master the Torah was phenomenal. All his life he carried with him – and personified — the memories of his mentors and his years in the Telz Yeshivah in Lithuania. He was a peerless orator, who moved listeners to tears and inspired them to scale heights. He had an awesome sense of responsibility to the yeshivah, the community, and even to the youngest talmid and most humble petitioner -he made time for everyone. Most of all, he loved Torah. It was his life’s goal – and his contagious zeal for learning created legions of talmidei chachamim in his image.

He interacted with the greatest sages of the era and was a fearless champion in the intellectual battles for the truth of Torah. And he was tender and understanding with the Jewishly unlearned US Navy veteran who stumbled into Telz, and the college girl searching for an Orthodox prayer experience. Students were awed by his intensity, but warmed by his tender and loving embrace.

He described himself as a “simple melamed” a teacher. His mission was to master Torah and transmit it in all its grandeur. He succeeded.

The book is lavishly illustrated , including many never-before published photographs. And it is filled with Rav Gifter’s ideals, teachings, perspectives, and classic orations, in his own words.

When he was a teenager, his wall was adorned with pictures of Torah giants – and there was one empty frame with the words “What about you?” The youngster from Portsmouth answered the question with his own magnificent life.