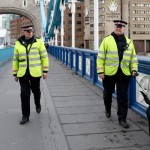 Signs telling women which side of the street to walk on, which were put up by a chareidi group in the northern London neighborhood of Stamford Hill, have been taken down by a London council.

The signs, with “women should please walk along this side of the road only” written in Hebrew and English, were put up by a chareidi group during a hachnosas Sefer Torah earlier last week according to the Shomrim Jewish group policing the neighborhood, reports The Independent.

Chaim Hochhauser of the neighborhood’s Shomrim group told the Hackney Gazette that he had spoken to the group that put up the signs, and warned them that their posters are misunderstood in the English text.

“Shomrim have since contacted the event organizers, and explained that these posters lacked explanation in the English text, and therefore could have offended people who don’t understand the Hebrew wording and the logo,” said Hochhauser. Read more at Arutz Sheva.