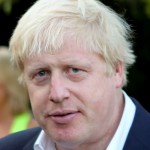 A visit by London Mayor Boris Johnson to the Palestinian “territories” has been severely curtailed by his hosts after Johnson pointedly criticized the Palestinian-led BDS movement, describing the campaign as “completely crazy.”

Johnson said, “I think that some people have obviously taken remarks I made about the boycott – which is, after all, British government policy – they’ve taken offense of that and that’s been very much whipped up on social media….If it’s true people are making threats or whatever, that’s very sad.”

At a speech commemorating Winston Churchill in Yerushalayim, Johnson said, “If we look at the history of modern Israel…there is something Churchillian about the country he helped to create. There is the audacity, the bravery, the willingness to take risks with feats of outrageous derring-do.” He added: “When [Churchill] wrote his 1922 white paper that paved the way for accelerated Jewish entry into Palestine, Churchill imagined Jews and Arabs living side by side.”