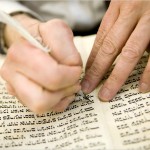 The Sefer Torah, donated to the community by British Jewish philanthropists Hilton and Louise Nathanson, was introduced on Monday during a special ceremony in the city’s shul, the rov of the Jewish Community of Lodz, Rabbi Simcha Keller, said.

“It is a wonderful culmination to the 210 years of existence of the local community and the 20th anniversary of its return to its prewar headquarters,” Rabbi Keller said of the donation made by the Nathansons.

The donors chose Lodz after celebrating their son’s bar mitzvah there, because their families hail from Lodz and Radom, PAP reported.

Lodz, which is located in central Poland, had hundreds of thousands of Jews before the Holocaust.

Prior to donation of the new Sefer Torah, the Jewish community of Lodz used a pre-World War II Sefer Torah that was so fragile that it had to be handled with extreme care to prevent tearing.