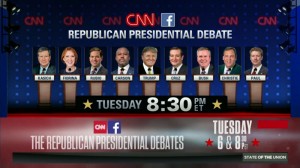 Via CNN: It’s time for the Republican presidential candidates to gather again, this time in Las Vegas for the fifth and last Republican debate of the year.

While the leaders of the Republican Party discuss the potential of a “brokered” or “contested” post-primary nominating process, the candidates will have another chance to debate topics such as national security and global terrorism.

Here’s everything you need to know about CNN’s upcoming Republican debate:

When is the Republican debate?

Where can I watch it?

The debate will air live exclusively on CNN. WATCH IT HERE.

Who will moderate the debate?

Wolf Blitzer, CNN’s anchor of “The Situation Room” and “Wolf,” will serve as moderator of the debate. CNN’s Dana Bash and Salem Radio Network host Hugh Hewitt will serve as panelists questioning the candidates.

Who is participating in the debate?