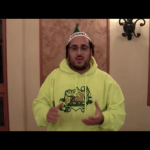 [Video below.] Singer Lipa Schmeltzer spent this past Shabbos, Parshas Re’eh, in the Boys Division of Oorah’s kiruv camp, “The Zone.” He raised the spirits of all the campers, composing a special song for the “Shabbos Revolution” that was taking place that Shabbos in the camp.

The last Shabbos of the camping season is a very special time in The Zone, as that culminates the kiruv efforts of their devoted staff all summer long. On this last Shabbos of the season, campers who kept Shabbos in its entirety were rewarded beautiful gifts after Shabbos. Those who were not on the level to keep the entire Shabbos were at least encouraged to refrain from doing four common things that they often did on Shabbos (e.g. turning on a light, playing with a Gameboy in bed, etc.).

Many of Oorah’s campers are public school children whose families are not observant and know very little about Yiddeshkeit. Oorah, in addition to giving them a summer of entertainment, tries to impress upon its campers the beauty of Yiddishkeit.  They then work with the parents and try to inspire them to enroll their children to yeshivos, offering to subsidize the tuition.

Lipa played a big role in this effort, making it exciting for the kids. On Motzoei Shabbos, he performed at a very entertaining concert for the boys division, reminding them again to try to continue their commitment to mitzvos and Shabbos throughout the year.

As Hurricane Irene drenched the East Coast, causing flooding and road closures, Lipa had to cancel a show that he was supposed to perform at elsewhere on Sunday night and he instead remained in The Zone. As the strength of the hurricane increased, it wiped out power lines in Gilboa, NY, leaving Oorah’s girls division campus without any power on their last night of camp. The boys division, located a mere ten minutes away, was not affected by the power outage. Lipa immediately volunteered to travel to the girls campus and lift their spirits, putting on a concert for them in the dark.

All the girls were immediately ushered into a room, with the only light emanating from flashlights. A small generator was set up to power the band, a microphone, and a small amplifier. Despite the sound challenges, Lipa electrified the crowd. Many of the girls commented that it was one of the most uplifting events they attended in their life.

After the concert, Lipa returned to the boys campus and participated in their end-of-camp banquet meal.

For those who are experiencing trouble viewing the video on our server try the YouTube version below.