Last year, at the White House Chanukahy part, after President Barack Obama and First Lady Michelle Obama lit the menorah, singer Lipa Schmelczer joined the audience in singing Ma’oz Tzur, which Lipa belted out with passion. Afterwards, President Obama shook hands with members of the Jewish community in the audience, and as he walked Lipa’s way, Lipa promised to bring the Obamas a gold and silver yarmulka.

“The words replayed in my mind ever since,” Lipa told Matzav.com.

As an entertainer for the past 17 years, Lipa has traveled the world performing at weddings and concerts. But it’s not only his voice that’s unique. He also makes a point to wear various special accessories, from his eyeglasses to his colorful bekishe. Perhaps most of all, his is proud of the yarmulka that he wears atop his head, an expression of his creativity.

“In bringing the president something a garment that means so much to me, I hoped that powerful connection—of individuality and spirituality—would be passed along to him, regardless of his religion,” Lipa told Matzav.

Lipa asked for a friend’s assistance in helping to conceptualize the yarmulka design. He agreed, and in exchange, Lipa helped him write Yiddish lyrics to a few songs he had recently composed.

Then Lipa visited another friend at Brooklyn’s Best Embroidery, a specialty shop that designs everything from talleisim to mantelach for Sifrei Torah.

While Lipa had noted to the Obamas that the yarmulka would be “gold and silver,” he quickly realized that he would not be able to use real gold for practical reasons: it’s quite expensive. So he decided to attach silver buttons, similar to those that are placed on the atarah of a tallis. Lipa included the names of the President and First Lady, along with the colors of the American and Israeli flags. He also included designs of The White House and Migdal Dovid in Yerushalayim. 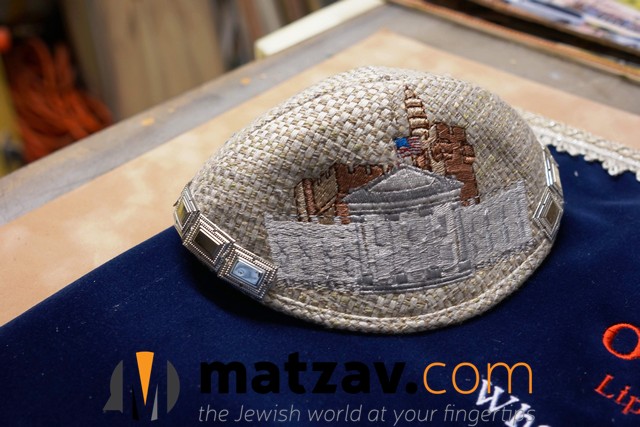 Last week, Lipa traveled to Washington, D.C., arriving at the White House at 2:30 p.m. on Yom Ha’aztzmaut for a planned meeting with his liaison there and for a private tour of the White House. Lipa was told that he would not be presenting the gifts directly to Obama, but the liaison explained that he would “give it to [President Obama’s] outer Oval Office team, just so it doesn’t go to a warehouse or anything like that, so he will be able to see it.” 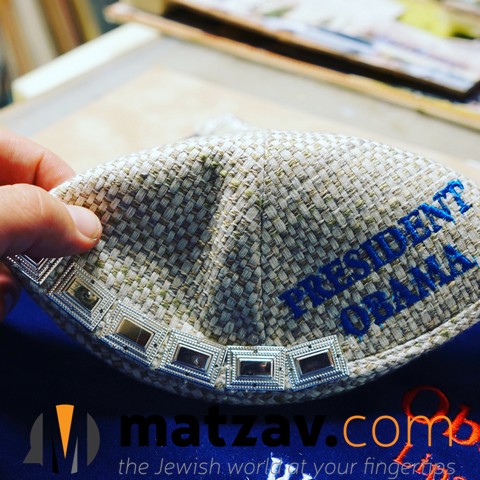 “I don’t know how, or even if, the President and the First Lady will use my yarmulka gift, or whether they’ll hang the velvet embroidered poem, titled Obamaism,’ on the wall in their palatial Washington, D.C. home,” Lipa told Matzav.com. “Maybe they’ll find a place for it when they move out of the White House. But I’m not disappointed. I followed through with a promise, which made me appreciate how lucky I am for the opportunities I have in my life, and for the opportunity to present the Obamas with two gifts that represent Jewish culture. I am honored to act in that role.”