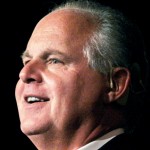 Rush Limbaugh argued that Trump calling for “a total and complete shutdown” of Muslims entering the US is “exactly what to do and how to do it to own their [the media’s] attention and airtime.”

Tuesday on “The Rush Limbaugh” show, Limbaugh argued, “This latest Donald Trump episode is a glittering, glaring example of how he is playing the media like a Stradivarius.”

“And I tell you, folks, for all of you people who have complained and whined and moaned about the media over the years, and how unfair they are to Republicans and how unfair that makes the whole process and, ‘What are we gonna do?’ You need to be studying Donald Trump,” Limbaugh explained. “I don’t care whether you think what he says is outrageous or wrong or whatever. That’s the wrong way to look at this right now.”

“This latest quote/unquote ‘outrage’ from Trump is a perfect example of how he plays the media, how he knows exactly what to do and how to do it to own their attention and airtime. He says things that he knows will drive them crazy,” Limbaugh suggested. “He says things over and over that he knows will drive them insane, and then when they go insane, he doubles down on it and drives them even crazier. He also knows that his audience is in on what he is doing.”