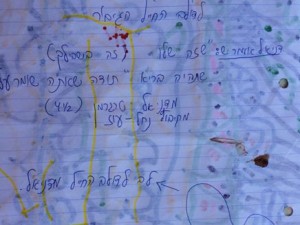 About a month before he was killed by a Hamas-fired mortar round outside his home near Gaza, Daniel Tragerman, aged 4, sent an Israeli soldier wounded in Gaza a get-well letter, wishing him a speedy recovery, Israel’s Channel 2 News reported on Sunday.

“To the heroic soldier, Dolev, be healthy,” wrote Daniel, “thank you for protecting me,” and attached a drawing with a heart.

Dolev was a friend of the family and was devastated by the news of the child’s mortal injuries at Kibbutz Nahal Oz, when a mortar shell slammed into the yard outside his home, where he was playing Friday morning.

Later that day, Daniel succumbed to his wounds, and was laid to rest Sunday at the Eshkol Regional Council cemetery.

“He was a year in my kindergarten,” said his teacher, Adi Sagi, who called him, an “amazing boy, very creative and talented, very special.” Only days earlier, the family had returned to the kibbutz, after fleeing to relatives out of rocket range for much of the month-and-a-half of fighting in Operation Protective Edge.

“In the last week, Daniel was so happy to be back to normal after all the days of fighting, which were very difficult for them, as they wandered from place to place in an unstable predicament,” Sagi recalled.

“Actually, last week when they got back to a normal schedule, I didn’t go in to work, for personal reasons, and I think maybe I was missing him, and I never got to say goodbye to him,” she said.

“I find solace in the fact that you were a loved and happy child until your last minute,” his mother, Gila, said at his funeral. “I do not understand what’s going on at all, sweetie. I cannot believe I’m here to say goodbye.”

“We were the happiest family in the world and I do not accept this,” she said.

“My Daniel, we want to thank you for teaching us to love, to smile, and for giving us many moments of joy in such a short time. You’re smart, sensitive, beautiful,” she said, according to Israel National News.

President Reuven Rivlin said in an eulogy that, “We knew the terrorists had no regard for blood of their children, and would not spare our own.”

“The whole nation is with you,” Rivlin said, and added that Daniel “was too small to cross the road by himself, but old enough to understand what rocket sirens are,” according to Haaretz.

Prime Minister Benjamin Netanyahu, speaking at the weekly Sunday Cabinet session, sent his condolences to the family, and said he appreciated the “resilience,” of Israelis in Gaza-area communities in coping with continuing rocket barrages.

“I appreciate your suffering and I share your pain,” the PM said. “We will do our utmost to help you through these difficult days. At the next Cabinet meeting, we will approve an extraordinary package of assistance for your communities. We are with you and we will stay with you until quiet is achieved, and afterwards as well.”

Finance Minister and Security Cabinet Member, Yair Lapid, said in a statement that, “This is a heartbreaking day for Israel. The funeral of Daniel Tragerman, who was only 4 and a half years old, is something that we cannot and must not tolerate. And we will not tolerate it.”

“The goal of Operation Protective Edge was to return quiet to the residents of the south. I have said for weeks now, in public and elsewhere, that Mohammed Deif is a marked man and the same is true for all those who are responsible for this death and destruction. The leadership of Hamas must know that we will find them and they will pay the price for the situation in southern Israel. Not one of them is immune. Not the political leadership, not the leadership abroad, no-one,” Lapid said.