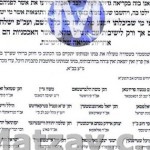 [Letter below.] A letter has been released, signed by over a dozen chassidishe rabbonim, strongly advising parents of bochurim not to send their sons to Eretz Yisroel to learn. Where there are many outstanding yeshivos in Eretz Hakodesh, the letter states, the danger inherent in sending boys far away from their parents is reason enough to put a halt to the practice.

In light of what they call a spiritual sakanah, the rabbonim, in the letter, instruct people to stop sending their sons overseas to Eretz Yisroel to learn, if possible. Those who, for whatever reason, feel they must send their sons to learn in Eretz Yisroel, the letter states, should make sure to send them to yeshivos where the dorming facilities are under the supervision of the yeshiva.