It all started with late-night solitaire at the state Capitol Monday.

And the fallout still hasn’t stopped.

Two Democratic legislators were playing solitaire on their state-issued computers Monday night during a late-night debate on the state budget, and an Associated Press photo that showed the solitaire games soon whipped around the nation on the Internet.

From there it was a short hop to national cable TV news.

Now there are calls for apologies – and for new rules regarding computer games at the Capitol. 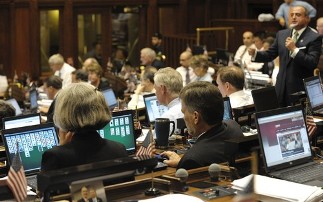 “I hope you share with me the sense of outrage felt by the people of Connecticut over the embarrassing spectacle of Democratic legislators playing solitaire on laptop computers while important debate was taking place on the state budget,” Foley wrote in a letter to House Speaker Christopher Donovan and Senate President Pro Tem Donald Williams.

Foley said that the photo “has subjected our state legislature to national shame and controversy.”

Milford Republicans are calling upon Democratic state Rep. Barbara Lambert to apologize for playing solitaire as House Republican leader Larry Cafero was speaking about the state budget. The chairman of the Milford Republican Town Committee, Tom Jagodzinski, said that voters “expect their elected officials to represent their interests, not be preoccupied with putting the red five on the black six. They expect their elected officials to listen to others’ ideas, not to be sitting in the people’s chamber looking for alternatives to Minesweeper.”

With a nod to Monday’s game-playing, Jagodzinski announced that the Milford Republicans will be holding a solitaire fundraiser at their campaign headquarters on Sept. 15 to raise money for the local police department.

Lambert, a Milford Democrat from the 118th District, replaced former House Speaker James Amann, who is now running for governor against Republican M. Jodi Rell. Lambert could not be reached Thursday night.

State Rep. Jack Hennessy, a Bridgeport Democrat, was playing solitaire on the computer next to Lambert, and he, too, could not be reached for comment.

Amann, a veteran of 18 years at the state Capitol, remembered the days when the House sessions were not televised and the general public had little idea what actually happened in the House chamber. During extremely long debates that spilled into the early morning hours in sessions that lasted more than 12 hours, House members sometimes started doing “the wave.”

Amann said that he could not blame Lambert – his successor – for playing a computer game.

“I’m sure if they panned the whole place [in a photograph], there would have been a lot more on solitaire,” Amann said.

A longtime colleague of Cafero’s, Amann said that he could understand why Democratic legislators were playing computer games.

“If anybody has listened to Larry Cafero, it’s the same speech five or six or seven times a year, and it causes solitaire to pop up,” Amann said. “All kidding aside, the speaker has got to make a decision. Texting is next.”

The photograph has been posted at various sites nationally, including the front page of The Drudge Report on the Internet and the printed edition of The Wall Street Journal.

“Ten or 15 years ago, cellphones started coming out,” Amann said. “But the speaker put a stop to it – no more cellphones. A lot of people used to watch baseball games. The [current] speaker has got to make a decision. These things are probably best kept in the caucus room.”

Baseball is still clearly popular at the Capitol. In the troublesome AP photograph, a Yankees pitcher was visible on yet a third computer screen, this one displaying espn.com.