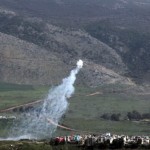 Beirut’s National News Agency reported that the suspects are a Syrian national, his Lebanese wife, and a Lebanese man. They allegedly formed and operated an espionage network based in Sidon, in the country’s south.

Quoting a statement issued by Lebanon’s General Security Agency, the report said the spy ring was tasked by Israeli intelligence with gathering information that could be used to “assassinate senior Lebanese officials.” The report said further arrests were underway.

The Hezbollah-affiliated Al-Manar television station said the three had “admitted to gathering information on security officials in Lebanon…and to taking pictures and videos of sensitive areas, which were sent to their handlers” in the Israeli military.