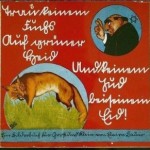 The book, titled Do Not Trust A Fox in The Meadow Nor the Oath of Any Jew, was first released in 1936. It was one of three antisemitic children’s books published by Der Stürmer, a weekly Nazi tabloid.

The paper, published by prominent Nazi Party official Julius Streicher, was a significant part of the Third Reich’s propaganda machine, and often ran obscenely antisemitic caricatures of Jews, blood libels and articles demanding the annihilation and extermination of the “Jewish race.”

The book contains antisemitic cartoons, depicting the racial differences between Jews and “normal” Germans, and presenting Jews as dishonest business owners who cheat non-Jews. It ends by saying, “The Jews are our misfortune.”