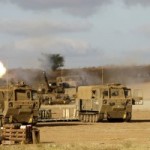 A leading American investigative journalist and political commentator is going on the offensive against the widespread claim that the vast majority of the casualties in Gaza during the summer conflict between Israel and Hamas were civilians.

Forbes contributor Richard Behar is taking the Associated Press (AP) to task for its repeated assertion that the overwhelming proportion of Palestinian deaths during the conflict were civilian. “They report it without any caveats, or any skepticism, or any competing sources of data,” Behar said in a post yesterday on his Facebook page.

In an interview with The Algemeiner, Behar – whose August 21 column entitled “The Media Intifada” offered trenchant criticisms of American media coverage of the Gaza war – expressed grave concern about the AP’s reporting of the conflict. “AP has enormous power and influence in the media world, especially with the big media outlets who pick up their material all the time,” Behar said. “As long as they keep shooting this stuff out, they are doing damage. They should not be saying in their stories that the vast majority of casualties are civilians. They could at least mention that there are other sources reaching different conclusions.”

A September 29 report from the Associated Press about Israeli Prime Minister Benjamin Netanyahu’s address to the United Nations General Assembly ended as follows: “During the 50-day Gaza war, which ended Aug. 26, Israel launched thousands of airstrikes against what it said were Hamas-linked targets in the densely populated coastal territory, while Gaza militants fired several thousand rockets at Israel. More than 2,100 Palestinians were killed, the vast majority civilians, along with more than 70 Israelis.”

That report is not the only time that the AP has used this formulation. A dispatch on Wednesday on President Obama’s meeting with Netanyahu contains the claim: “It’s the first time the two leaders have met since Israel’s summer war with Hamas, which killed more than 2,100 Palestinians – the vast majority of them civilians – and more than 70 Israelis.”

Data gathered on the ground in Gaza remains sketchy, and certainly doesn’t provide a solid basis for the assertion that the “vast majority” of Palestinian casualties were civilians. As The Washington Post’s William Booth reported at the end of August, UN figures – which are based on numbers provided by the Hamas-controlled Health Ministry in Gaza – maintain that 69 percent of those killed were civilians. The Israeli government, however, calculates that 52 percent of those killed were civilians, Booth wrote.

Previous civilian tallies from the Gaza wars of 2009 and 2012 were also fraught with controversy and glaring inaccuracies. Concerning the most recent round of fighting, Booth noted that while “Hamas officials stressed the high numbers of civilian casualties, [spokesman Ashraf al] Kidra and the Health Ministry did not provide any breakdown of combatants and civilians – just names, ages and gender. Kidra’s position, though, was clear. ‘They are all civilians,’ he said. ‘All the dead in all the houses, in the mosques, in the cars, in fields and the facilities for the disabled.'”

Detailed research by the Meir Amit Intelligence and Terrorism Information Center, an Israeli think-tank, reaches very different conclusions based on the same lists of names collated by the Gaza Health Ministry. The Center has now issued five reports examining the names of the Palestinians killed in Operation Protective Edge, arguing that “the findings of our investigation so far (based on approximately 40% of the names of the dead) suggest that terrorist operatives constitute about 49 percent of the fatalities who have been identified, while non-involved civilians constitute approximately 51 percent.”

Such findings, Richard Behar said, should persuade media outlets like the AP that unambiguous references to civilians as the “vast majority” of the dead does a serious disservice to accurate reporting. “Do journalism,” Behar urged. “That’s what AP customers pay for.”