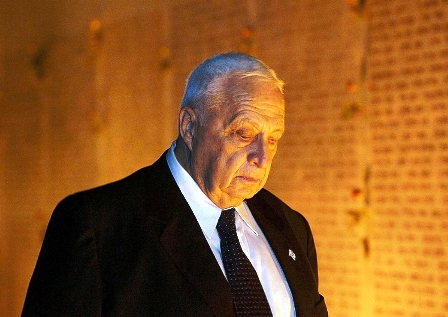 Until his implementation of the disengagement from Gush Katif Sharon was a revered leader of the resident of Judea and Samaria. In the 1970s, 1980s, and 1990s, Sharon championed construction of Israeli communities in Judea and Samaria and the Gaza Strip. In 2004 – 05 Sharon orchestrated Israel’s unilateral disengagement from the Gaza Strip. Sharon’s plan was welcomed by both the Palestinian Authority and Israel’s left wing. However, it was greeted with opposition from within his own Likud party and from other right wing Israelis, on national security, military, and religious grounds. Between August 2005 16th – 30th, Sharon controversially expelled 9,480 Israelis from 21 communities in Gaza and four communities in Samaria. The rift between Sharon and the residents of Judean and Samaria was irreparable.

After Sharon’s passing yesterday leaders form Judea and Samaria have expressed their mixed, and at times confused, sentiments regarding his life and legacy.
The Yesha Council, the umbrella organization for of Judea and Samaria, issued the following statement: “The Yesha Council mourns, together with the rest of the Israeli Nation, the passing of Former Prime Minister Sharon. Today, on the day of his passing, we will remember his merits and his vast contribution to Israel’s security and to the building of the settlements for several decades, and we hope that this legacy of his will be remembered today and in the future.”
Former Yesha Council head Danny Dayan expressed his unequivocal sorrow: “This is a sad day, with no exception. Sharon was a great man and the State of Israel is greatly indebted to him, he was the greatest Jewish military commander in the past 2,000 years. He crossed the Suez Canal, established communities throughout the land and uprooted terror when everyone thought it was impossible.”
Emily Amrusi, a journalist and former spokeswoman for the Yesha Council was more critical of Sharon’s actions: “The disengagement was not a “brave action”, but a wicked one, and its instigator caused great pain to the ones who loved him…it was undemocratic, un-Zionist, and not in line with human rights. We are in pain, we have been burned. Last night a siren was heard in the Regional Council of Ashkelon Beach. Sharon was not there to hear it; he was not around for the past eight years to eat the bitter results of his actions. Sharon left behind him scorched earth, a torn people and pillars of smoke. I want to tell me children of the man who crossed the Suez Canal, but find myself telling them about the man who split the nation. He had many merits as a builder, as a man of defense and war, but I can’t remember them. The lens is mucked up by painful feelings. I look at Sharon’s portrait and see the synagogue at Neve Dekalim ablaze. I am sorry, I cannot forgive,” she wrote on her Facebook page.
MK Orit Strouk (Bayit Yehudi), a settler human rights activist and resident of Hebron sparked controversy when she released her statement. “Sharon was one of the greatest builders of the land and its greatest destroyer. I thank G-d for removing him from public life before he had a chance to cause a catastrophe to the remaining residents of Judea and Samaria as he did to the residents of Gush Katif.”

She later retracted her words and apologized: “I respect Sharon’s contribution for the Israeli Nation and Land. I did not pray for his death. I am not glad about the way he ended his life. I am not G-d’s accountant, but the fact is that he was unable to continue with his plans to uproot more communities, and the State of Israel was saved. I apologize to anyone who was offended by me words,” she concluded.
Rabbi Shlomo Aviner, a prominent rabbi, said his failures did not annul his achievements: “Ascend to the Heavens man of the military, man of the settlements, and man of leadership who we are all indebted to. Ascend to the Heavens man of opposites, and we pray that you find rest. That hero that failed with the destruction of Gush Katif, even though one must keep in mind that he thought he was working for the benefit of the nation. His failures do not annul his achievements.”
Benny Katsover, a leader of the Gush Emunim settlement movement and who worked with Sharon for many years, talked about mixed feelings and a split heart: “My heart is split, I am in pain. I worked with Sharon for many years fighting for the communities in Judea and Samaria. I met an impressive man in all aspects. On the other hand, Sharon tarnished him massive achievements in Judea and Samaria with the disengagement, and the wound continues to bleed on a personal level as well as on a public level. I have mixed feeling when relating to him.”