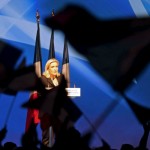 Marine Le Pen, the leader of France’s far right National Front party, said today that “France and the French are not safe” following the terrorist attacks in Paris.

Le Pen said Islamic fundamentalism must be “annihilated.” She opened her speech declaring, “My dear compatriots, we’re living a nightmare, we’re living a national tragedy.” Le Pen continued, claiming, “France has to determine who her allies and enemies are. Her enemies are those countries who maintain good relationships with radical Islamism. It’s also those countries who have an ambiguous attitude with the terrorist actions. All those who fight against them are allies of France and they have to be treated as such.”

Le Pen, who is viewed as anti-immigrant, then took the opportunity to speak about immigration. “The president [Hollande] has declared the state of emergency and the permanent control at the borders: that is good. But whatever the European Union says, it is necessary that France recovers the power over her national borders forever. Without borders there is no protection nor security possible,” she said.

“France has to forbid every Islamic organization, close the radical mosques, and expel all the foreigners who encourage hate in our own land like the illegal immigrants who have nothing to do here.”

France has struggled to combat a wave of young, disaffected citizens leaving to fight with ISIS or Al Qaeda in Syria and then returning home. Speaking to this, Le Pen argued that such citizens “have to be deprived of their French nationality and forbidden to enter the territory.” She also called for France to increase its military and police forces. Read more at Europe 1.