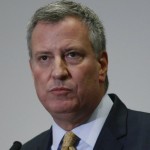 Civil liberties lawyer Norman Siegel said he finds some things Donald Trump has said offensive, but he said New York Mayor Bill de Blasio is wrong to threaten to cancel city contracts with his businesses over it.

“Some of the things Donald Trump has said are offensive. They’re wrong-minded, and they’re repugnant,” Siegel said Sunday on “The Cats Roundtable” on AM 970 in New York.

De Blasio said in July that he is trying to see if the city can legally get out of any contracts with Trump after the GOP presidential front-runner angered many by saying that some Mexicans entering the United States illegally are rapists and murderers. De Blasio added that if the city can’t cancel existing contracts it won’t be making any new ones.

But the mayor of the nation’s largest city can’t make such threats, Siegel told radio host Catsimatidis, because it is a threat to free speech.
Latest News Update

“What we do is we confront them. A more free speech approach rather than self-censorship or censorship by the government,” he added. “I think that we are in a period now where if we’re not vigilant about free speech and the principles underlying free speech it’s going to erode, and once you lose it you don’t get it back.”