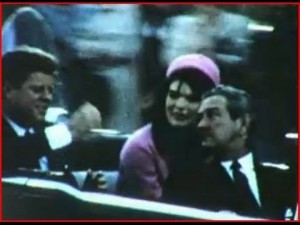 The granddaughter of a man who filmed JFK’s assassination is suing to get the video back from the U.S. government. Gayle Nix Jackson says her grandfather, Orville Nix, shot a video that is a mirror image of the well-known Zapruder film of the assassination, and that it has never been returned to her family.

Jackson’s suit against the federal government demands the return of the original, or $10 million. Read more at The Washington Post.