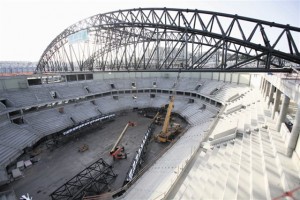 Just days before the Payis Arena is set to open in Yerushalayim, workers are drilling the blue cushioned seats into the stadium, the roof is yet to be completed and cables snake everywhere throughout the huge eight-level stadium, Ynet reports.

The project has been under construction for five years.

“This is a dream come true,” Yerushalayim mayor Nir Barkat told The Media Line, standing on the main floor of the arena. “We’ve been dreaming bout such a stadium for decades. Jerusalem is now back to leading Israel as the center for culture and tourism.”

The arena cost more than $114 million to build, two-thirds of which came from Mifal Hapayis, Israel’s national lottery. The lottery, incidentally, took in more than $1.7 billion last year. The arena can seat 11,600 people in 18 galleries and 16 VIP boxes. Including floor seating, the stadium can hold 15,000 spectators.

Barkat said he believes the stadium is the biggest in the Middle East, although a huge monolith under construction in Qatar for the World Cup in 2022 is expected to have a capacity of 60,000 spectators.

The stadium, which used 25,000 cubic meters of concrete and 3000 tons of iron to build, can be changed according to the event being held there. A parquet floor is rolled out for a basketball tournament, while a different floor can be put in place for a circus performance. It is completely handicapped-accessible, and for the next three months, the stadium is already booked more than half the time.