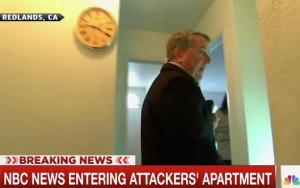 Reporting live on MSNBC, reporter Kerry Sanders rummaged through the couple’s belongings, including family photographs, Arabic-language work books, and gifts for the six-month-old child they left behind.

Several other outlets photographed the residence, which had already been investigated by federal officials as part of the ongoing investigation. Fox’s Will Carr and CNN’s Victor Blackwell both reported live from inside the home; MSNBC was the only network of the three to broadcast identification cards, including Social Security and drivers licenses.

Some national legislators expressed dismay that the public would be allowed into the home while investigations are still in process. A San Bernardino sheriff’s spokesperson said “That is not a cleared crime scene.”

The landlord claimed he did not “allow” media into the house, but that they “rushed in” when he opened it.