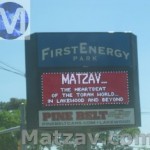 Zach Patberg of The Asbury Park Press reports: The “bond” fire at the BlueClaws stadium on Friday was little more than a flame sputtering from a portable hibachi grill – perhaps a bit anticlimactic for the ceremonial end to the largest and longest-running public debt facing township economic development.But, the point was made.

“(Twenty) million dollars . . . it burns fast,” Mayor Robert W. Singer said after dipping into the fire a scroll meant to represent that last bond owed to pay off the minor league ball field and promised commercial anchor of Lakewood.

Yet, the feat elevates beyond mere ownership pride. With the closure, another few million dollars a year will be loosened up for other economic projects, such as job links, small-business loans and road improvements, said Patricia Komsa, executive director of the Lakewood Development Corporation. The LDC pays for the programs through a portion of the sales tax collected within its state-run Urban Enterprise Zone.

Township officials, realizing in the late 1990s that the stadium cost was too much for local or county budgets, solicited the state, which agreed to guarantee the bonds through the UEZ.

In 2001, after plans to host a New York Yankees franchise fell through, FirstEnergy Park brought in a Philadelphia Phillies farm team, the Lakewood BlueClaws, currently the Shore’s sole professional baseball team. The LDC has been repaying about $2.5 million a year since.

The hope has been that the park would lure tourists and be the bedrock for retail growth around New Hampshire and Cedar Bridge avenues. That proved to be a most elusive goal. A major business park blueprinted there a decade ago remains unrealized.

Yet Singer, also a state senator, portrayed Friday’s bitter cold ceremony as a milestone. Along with a new field cover and 2,000 more seats for the stadium, he cited plans to draw in more concerts and transplant Town Hall to the surrounding vacant land.

“We’re looking at this as a beginning,” he said.