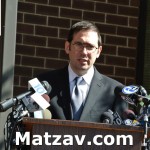 The move, which will be officially announced at Friday’s annual re-organization meeting, represents a return to the political order of 2014, when the men held those same roles. In the world of a 3-2 Republican majority, it isn’t uncommon for members of the controlling party to move between roles.

On the five-member Township Committee, the position of mayor doesn’t necessarily hold any more legislative power than any other committee member. The mayor represents the face of the township and also helps push the legislative agenda for the coming year.

On Friday Lichtenstein and Miller will be sworn in for a new three-year term after achieving landslide victories in November. First elected in 2003, the duo will begin their sixth term on Lakewood’s governing body.

The Committee members will also divide assignments and liaison roles to township departments. Lichtenstein, a longtime Hatzolah member, is expected to maintain his role as liaison to emergency services and act as police commissioner. Coles has long been the township’s emissary to the Department of Public Works.