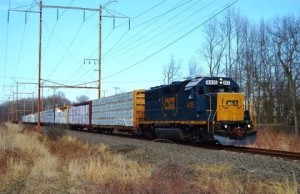 I would like to share with you an occurrence I witnessed last week that I feel strongly defies what we represent. What I’m referring to is what goes on during the weekly visit here in Lakewood, NJ, by what is known simply as “The Train.”

What I witnessed was as follows:

I was walking down Park Avenue near the intersection of County Line Road, when I heard the horn of the train in the distance. Suddenly, as if summoned by some hidden force, close to one hundred children appeared from all sides. The first thing I noticed was that there were a whole bunch of kids, some who looked to be as young as five years old, running on to or riding their bikes on the tracks right in front of the train, as if to escort it into town. No elaboration is needed to describe the chillul Hashem and of course the danger involved in doing this.

The children actually did this for as far as I was able to see at each intersection as the train proceeded along Park Avenue and continued into town.

The next very disturbing thing I saw was that the children started spreading rocks and stones from the rail bed onto the actual tracks to see them get crushed as the train rode over them. Again, there is no need to elaborate on the chillul Hashem and danger this involves.

The next thing I saw really shocked me. As most have heard or noticed, the intersection of Park Avenue and County Line Road was recently equipped with new gates to block the road as the train passes. During the short pause (which was definitely lengthened by the procession of children), no fewer than three cars driven by Yidden went around the gate and crossed the tracks. The last car almost collided with the train and had to back up after making a shortstop right on the tracks.

I then noticed some children throwing rocks and pieces of wood at the train as it went by.

A short while later, I met up with the engineer and the conductor of the train and was able to hear their perspective on this weekly occurrence.

Unsurprisingly, the engineer had some very strong words to say to us. He stated as follows:

He has been driving trains for over 25 years and has been doing this run from Sayreville, NJ, to Lakewood for the past couple of years. (As a side note, a lot of the lumber used to build houses in Lakewood is delivered through this run.) He said that what I witnessed happens every Thursday during the summer as he passes through Lakewood. He told me that from all the towns and cities that he passes through, Lakewood is the only one where the children do this and the only town where cars jump the track. He also said that in his entire career, he has never seen cars pass through a closed gate until he saw it this past week in Lakewood. He said that the danger to himself and the children when passing through Lakewood makes him question his job, and he’s close to quitting.

He went on to explain that besides the damage to the rail company’s property, the stones laid down along the track pose a danger to him and to the children, as there exists the possibility of the train derailing. I do not need to go into detail about what can happen in such a situation.

He continued to say that as the train pulverizes the stones, the fragments of rock that shoot out can be going as fast as a bullet and can pierce right though anyone standing close by.

He also said that a train takes a lot longer to stop than a car does, and this poses great danger to children who run and ride in front of him if they were to fall, lo aleinu. He went on to say that he constantly sees adults just standing by and not saying anything as all this happens, greatly adding to his frustration.

I’ll quote a question he asked me during our conversation:

Do we need a child to get killed in order for parents to stop them from doing these things?

I am writing this letter to hopefully stop the problem in its tracks, so to say, before that happens, chalilah.

It is not necessary for me to explain how wrong this all is. We must remember our place in golus and be makir tov to the medinah shel chessed that we live in. It is situations like these that, at times, cause us to be looked down upon by our neighbors.

Parents, please tell your children that it is fine to stand by and watch the train pass, but anything that may be a chillul Hashem or a sakanah is absolutely off limits. It is your responsibility to teach your children how they must act.