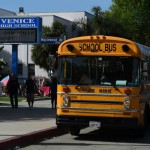 Los Angeles shut more than 1,000 public schools on Tuesday over a threatened attack with bombs and assault rifles, sending hundreds of thousands of students home as city leaders were criticized for overreacting to what federal officials later said was likely a hoax.

The emailed threat, which authorities said was “routed through Germany” but likely originated locally, was made nearly two weeks after a married couple inspired by Islamic State killed 14 people and wounded 22 others at a county office building 60 miles (100 km) away in San Bernardino.

“Based on past circumstance, I could not take the chance,” Los Angeles School Superintendent Ramon Cortines told a news conference. Cortines told Reuters later in the day that all schools in the Los Angeles Unified School District were expected to reopen on Wednesday.

Federal officials, who asked not to be identified, echoed an assessment by New York City Police Commissioner William Bratton that the decision in Los Angeles was an “overreaction” and that New York had received an almost identical threat that was quickly deemed not credible.

Los Angeles Mayor Eric Garcetti backed the decision and Police Chief Charlie Beck said it should not be second-guessed because the threat was “very specific to Los Angeles Unified School District campuses.”