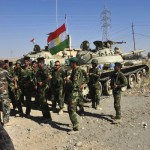 Kurdish officials say forces have manged to recapture the eastern part of the Mosul dam from ISIS. The joint operation involved Kurdish troops on the ground combined with U.S. airstrikes. ISIS seized the strategic dam on August 7, which provides water and electricity to northern Iraq. ISIS’ control created fears that the militant group would try to flood the region. The U.S. said its latest airstrikes destroyed 19 ISIS vehicles.

According to Hoshyar Zebari, a senior Kurdish official, the Peshmerga are “encountering fierce resistance, bombs on the roadside, suicide bombers and so on.” Still, they “are pushing and taking the fight to them to clear the dam.” Read more at BBC.