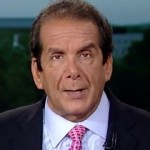 Towards the tail end of his press conference yesterday, President Obama said Hamas “acts extraordinarily irresponsibly” when it fires rockets from civilian areas. This wording really set off both Charles Krauthammer and Ron Fournier on Fox News today, who were both just stunned at this rather understated wording.

Krauthammer described Obama’s comments as “lethargic and disinterested and detached.” And as for that “irresponsible” line, Krauthammer said, “It’s a bloody war crime! I mean, there’s no passion, there’s no interest, there’s nothing behind it.”

Fournier, meanwhile, added, “Frat boys are extraordinarily irresponsible. Hamas is a terrorist organization that’s killing people. Words matter then you’re trying to lead a country… I’m stunned by how poorly he uses them.”