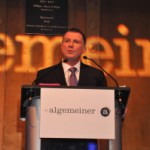 Knesset Speaker Yuli Edelstein aired staunch Israeli disapproval of the EU’s decision to go ahead with settlement labeling during his address to the German parliament on Wednesday.

Quoting 19th century German author Heinrich Heine, who wrote that “Wherever they burn books they will also, in the end, burn human beings,” Edelstein admonished the Bundestag, “I fear that wherever they label products based on their place of manufacture, they will also, someday, label people based on where they’re from.”

Edelstein repeated Israeli concerns that the labeling of products from Israeli settlements in the West Bank and from the Golan Heights galvanized the anti-Israel Boycott, Divestment and Sanctions Movement (BDS), which he said acts under the pretense of humanitarian concern but is really motivated by “blind hatred” for Israel.

“Ironically, the boycott will actually bring about more damage to Palestinians, and could lead them to a path of poverty and despair,” said Edelstein, once again framing the guidelines for labeling products from the internationally disputed West Bank settlements with the issue of an Israel boycott.

The EU has said the settlement labeling is not motivated by politics or, as some critics have alleged, antisemitism, but is simply a matter of EU regulations related to products produced in “occupied territory.” Israeli critics of the EU move have pointed out that Europe made no similar distinction for products originating in the disputed territories of, inter alia, Tibet, Western Sahara and northern Cyprus.

According to The Jerusalem Post, Bundestag President Prof. Norbert Lammert repeated Germany’s rejection of the labeling policy. A major German department store recently restored Golan Heights wines to its shelves after removing them following the new enforcement of the EU labeling guidelines.

Edelstein, a son of Holocaust survivors, was visiting Berlin to mark 50 years of Israeli-German relations.