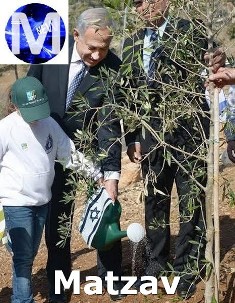 For the first time in the 65 years of Knesset history, an official Tu Bishvat ceremony was held by members of Israel’s parliament today.

Some 40 Knesset members and ministers participated, along with rabbis, dignitaries and 60 other visitors. Initiated by Yesh Atid MK Ruth Calderon and the Tzohar national-religious association, the participants recited blessings over the fruit from the seven biblical species, drank wine, and read Talmudic literature.

Tu Bishvat marks the beginning of the Jewish ‘new year for trees’ and follows the biblical edict of calculating the age of fruit trees in the Land of Israel. Celebrated on the 15th day of the Jewish month of Shvat, the holiday is observed by eating fruits, especially those connected to the Land of Israel including grapes, figs, pomegranates, dates and olives. The seder or festive meal of fruits and wine has mystical roots, originating from 16th century Tsfat, where Kabbalists developed the symbolic meal based on the Passover seder.

Speaker of the Knesset MK Yuli Edelstein spoke about the significance of the holiday for him personally at the Knesset ceremony.

“When I was young I couldn’t even imagine the scent of the fruits of Israel and its vistas, they were a far-off desire of my heart,” said Edelstein. Imprisoned for Zionist activities in Siberia by the Communist Regime in the 1980s, Edelstein made aliyah to Israel in 1987.

“When I lived in Russia, the holiday would fall in the midst of bone-chilling winters but here it’s a whole different experience and one that allows us to rejoice in our homeland,” recalled Edelstein.

Rabbi David Stav, who led the ceremony at the Knesset, described the holiday as ‘a festival of faith.’ “As the Speaker of the Knesset spoke about his youth and his complete faith that he would get to Israel, so to on Tu Bishvat we believe that underground seeds are beginning to germinate ahead of the spring blossoming,” said Stav.

“Someone who plants trees, or is involved in education, knows that it is about connecting the past with the future; that even when you don’t see the fruit you believe that it is burgeoning and is already on its way.”