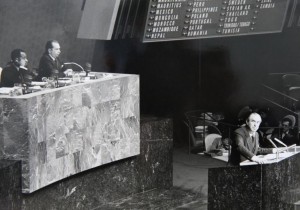 The Knesset on Tuesday commemorated the famous 1975 speech by the Israeli Ambassador to the UN at the time, Chaim Herzog, who condemned UN General Assembly Resolution 3379 that declared Zionism to be a form of racism.

Opposition Chairman MK Isaac Herzog, who is the son of Ambassador Chaim Herzog, stressed that Israel continues to fight the same battles faced by his father. “The State of Israel is still fighting for its existence and international standing 40 years later,” said MK Herzog.

That day coincided with the 37th anniversary Kristallnacht, or the Night of Shattered Glass, in Germany. The resolution was adopted by a 72-35 vote with 32 abstentions and remained in place for until it was revoked in 1991, by which time Herzog was Israel’s sixth president.

At the end of his speech, described by the Israeli mission as “one of the most influential” addresses in history, Herzog had made a powerful impact when he tore up the resolution on the podium before the UN General Assembly.