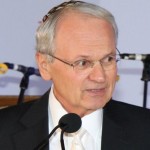 President Obama’s address to the nation from the Oval Office on Sunday was a “frightening disgrace,” said the head of a major US Jewish group on Monday.

In a harshly worded statement, Morton A. Klein, president of the Zionist Organization of America (ZOA), slammed what he called “Obama’s terrorism speech” and listed what he considered to be the 16 “specific areas of concern” that emerged from it.

“Not only was there no new policy,” Klein’s statement read, “but it was filled with falsehoods about the daily intelligence briefings.”

It misled us on his exaggerated bombing raids, intimidated Americans into silence of suspicious radical Muslim activity, while dismissing legitimate American concerns of bringing Syrian Muslim refugees to America. And why did he spend a disproportionate amount of time defending Muslims and warning us against anti-radical Muslim actions when there is no evidence of any outbreak of increased violence against American Muslims? In fact, the clear majority of hate crimes in America are against Jews — at four times the rate compared to Muslims. President Obama’s speech last night offered virtually nothing to comfort the American people’s well-warranted fears about the radical Islamist threat to our country. The president’s speech also included serious distractions from the real issues.   Moreover, many of the steps the president listed to combat ISIS are not being implemented as stated, are ineffective, unrealistic, and/or counterproductive.

Why is Pres. Obama refusing to use all of our resources to destroy the greatest scourge facing the world and America, namely radical Islamist Jihadist terrorism? Why won’t he state that we are at war with radical Islam, as President [Francoise] Hollande of France and others did? Obama’s speech brings to mind his refusal to attend the anti-radical Muslim rally in Paris, his ordering the deletion of the term “radical Islam” in our military documents, his releasing radical Islamic terrorists from Guantanamo, and his invitations to Muslim Brotherhood to meet at the White House. It reminds one of his attendance for 20 years at Rev. Wright’s anti-America, anti-Israel church, his claiming that Hezbollah and Hamas have legitimate claims, and telling Jewish leaders that Abbas is sincere about peace, but Jewish and Israeli leaders should search their souls to see if they are serious about peace, and his opposing sanctions on Iran every time they were introduced, and on and on. Is the president’s attitude toward radical Islam an appropriate attitude?

Klein’s key criticisms of the speech were that it appeared to show Obama:

1. Furthering political correctness, indicated by the hesitance expressed by the San Bernardino terrorists’ neighbors to contact police about suspicious activity going on next door – for fear of being accused of ethnic profiling.

2. Ignoring the American people’s legitimate worry about the ability of terrorists to infiltrate the United States as refugees.

3. Violating federal law by asserting that refugees should not be “tested” based on religion.

4. Failing to call the office gathering where the San Bernardino massacre took place a “Christmas party.”

5. Failing to acknowledge that the San Bernardino killers were part of an international terror group or of a “broader conspiracy at home.”

6. Refusing to use the term “radical Islamist terrorism.”

7. Persisting in the assertion that al-Qaeda has been “decimated.”

8. Refusing to make a connection between Islamists across the globe, limiting himself to al-Qaeda and ISIS, while ignoring Iran.

9. Persisting in claiming that he has been confronting terrorist threats by following the security briefings of US intelligence professionals.

10. Continuing to assert that anti-Muslim discrimination is a major problem in the US, though “FBI hate crime statistics throughout the past two decades confirm that bias offenses against Jews, Asians, whites, blacks, lesbians, other members of the LGBT community, Hispanics, and other ethnicities are all far greater than offenses against Muslims.”

11. Reiterating a false statement about the amount of training and equipment he is providing the Syrian and Iraqi forces fighting ISIS.

12. Exaggerating the number and impact of American air strikes on ISIS.

13. Asserting that the US is “hardening our defenses,” while defense spending has been severely cut.

14. Exaggerating the existence and strength of the anti-ISIS “coalition.”

15. Reiterating a push for gun control.

16. While warning against the “extremist ideology in some Muslim communities,” failing “to mention that the same hateful radical Islamist ideology is also shared by numerous other entities that incite terror and terrorize and murder innocent civilians in the name of Islam – including Iran, the Muslim Brotherhood, Hamas, Fatah, Islamic Jihad, the PLO/Palestinian Authority and Hezbollah.”

Obama’s speech came on the heels of last Wednesday’s shootings in San Bernardino, California, which left 14 people dead and at least 17 others wounded. The perpetrators, who were both shot and killed by police after a four-hour manhunt, were identified as Syed Rizwan Farook and his wife, Tashfeen Malik. The couple had left their six-month-old baby with grandparents to commit the mass murder, which took place during a Christmas party at the Inland Regional Center, where Farook had been employed.