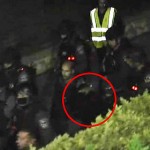 As reported previously, four people, including a 13-year-old girl, were wounded in a stabbing attack on Rechov Dovid Hamelech, in the southern Israeli city of Kiryat Gat tonight.

Magan David Adom reported that the victims included the 13-year-old female, a 51-year-old male and two other females ages 44 and 56. All were in moderate condition after being evacuated to the hospital.

A male teenage suspect was captured in the city a few hours after the attack; he originally fled the scene and some 250 policemen searched the area with the air support and with guns drawn, on high alert.

He was caught with a blood-soaked knife on the same street where the attack took place. Two of his friends gave him up to the authorities and he was subsequently identified as an illegal worker from Chevron.

Roadblocks were erected at the entrances to Kiryat Gat for the duration of the search, effectively enforcing a complete lock down of the city.

The suspect was led away from the scene guarded by dozens of policemen who held back a crowd of angry locals.

A Bedouin man was also lightly wounded at the scene when a group that suspected that he was the attacker, tied his hands and beat him.

He was evacuated to Brazilai Hospital in Ashkelon.