The American Community Survey is run annually by the Census Bureau, as an effort to better understand the American population. One of the many demographic measures in the survey is the median age of the population. Using estimates from the 2008-2012 ACS for all places with more than 10,000 people, they found the place with the lowest median age in every state:

Unsurprisingly, many of the youngest places are either large colleges and universities, or towns and cities associated with one or more institutions of higher learning. Having a lot of college students around naturally brings down the median age.

Similarly, a few military bases, like the sprawling Fort Hood, TX, appear on the list. Many soldiers, sailors, marines, and airmen are in their late teens or twenties, and as with college students, their presence will lower the median age of a place.

Here’s a table of the youngest place in each state: 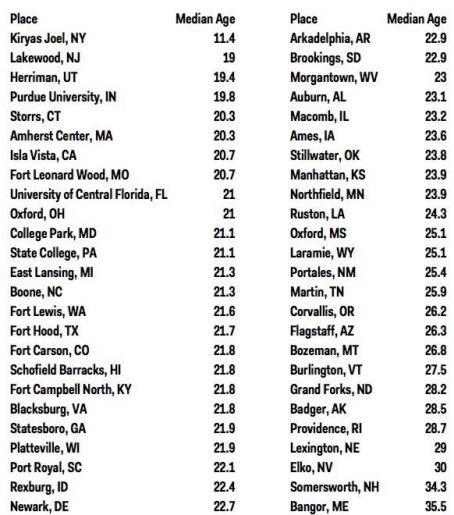