The annual Kings Highway Shabbos Parade has been led for more than a dozen years by Reb Chaim Rauch. Years before, he led successful Shabbos marches on Avenue M and Avenue J in Flatbush. Prior to the parades in Flatbush, Reb Chaim led annual marches and went weekly from store to store on 13th Avenue in Boro Park for forty-five years to urge the merchants to close for Shabbos.

Reb Chaim did very well. Virtually every store on 13th Avenue remains closed for Shabbos to this day. On Avenue M and Avenue J, similar results are evident. Shabbos is very palpable on those avenues.

Some success is visible on Kings Highway as well. Morris Cleaners, Fruits-A-Plenty, Computer Software Plus and William Barthman Jewelers are prime examples of establishments closed for Shabbos despite economic pressures and temptations. Additional examples are Reliance Cleaners and BP Car Wash, located not far from Kings Highway, whose proprietors also made the decision to close for Shabbos. These six merchants are honored by Vaad Shmiras Shabbos and the community each year when the parade is held. 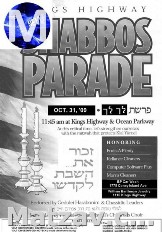 Around the time of the parade, as people’s awareness of shemiras Shabbos is heightened, first-person narratives of personal experiences in becoming Shabbos observant come out. One such story is told by a partner in a retail discount variety store. The store had been open on Shabbos for several years. Suddenly, the partners agreed to close for Shabbos. That same year, a tzedaka auction ticket was bought under the address of the newly shomer Shabbos business – and they won $18,000! This represented nearly two years worth of single day profits. The partner telling the story relates that he has no doubt about the connection between the prize and the closing of the store for Shabbos.

Reb Chaim Rauch has had a hand in many shemiras Shabbos success stories over the years. He has made many personal sacrifices for more than 55 years to ensure that his neighborhood in Boro Park and the neighborhoods of Flatbush are shomer Shabbos. Getting on in age and not up to the physical exertions of earlier years, he sends his best wishes and bracha to all who honor Shabbos by their observance and by their participation in the parade.

This year’s parade is scheduled for this Shabbos, Parshas Lech Lecha. The parade – whose purpose is to highlight the importance of honoring Shabbos Kodesh – will start at 11:45 a.m. at the corner of Kings Highway and Ocean Parkway and will proceed eastward along Kings Highway to Ocean Avenue. It will then reverse direction and head back towards its terminus at Kings Highway and East 12th St. (Sgt. Joyce Kilmer Park).

In recent years, the parade has been graced with the participation of a Pirchei boys choir led by Rabbi Maimon Elbaz and supplemented by choirs from several local shuls such as Netivot Israel, Bnai Yosef and Ahiezer.

He recalled the message given at the end of a Shabbos parade many years ago by Rav Shmuel Berenbaum zt”l, renowned Mirrer rosh yeshiva. He had stated that it is incumbent upon all of us to strengthen our own Shabbos observance through better knowledge of its halachos in order to effect an improvement in Shabbos observance throughout our neighborhood.
At the last parade rabbanim of neighborhood shuls and communities, both Ashkenaz and Sefard, offered words of bracha for the success of the parade.

Rav Eliezer Ginsburg, rov of the Agudas Yisroel of Flatbush South and Rosh Kollel of Mirrer Yeshiva, enthralled the crowd with a recent first person Shemiras Shabbos story. He told the real life story of the challenge of a young ba’al teshuvah in getting off work for Shabbos and thus also influenced his boss to also become Shomer Shabbos.
Rabbi Admoni of Congregation Bnai Yosef, a community liaison to the 61st Police Precinct, expressed the community’s deep appreciation for the important work performed by the New York City Police Department. He thanked 61st Precinct Commanding Officer Captain Georgios Mastrokostas, Sergeant Doyle of Community Affairs, Officer Chris Mullen for Auxiliary Police coverage as well as Auxiliary Police Lieutenant Bogner and Officer Lugo who very capably managed the parade’s safety and security.

In the event of inclement weather, the parade will be held next Shabbos, Parshas Vayeirah.