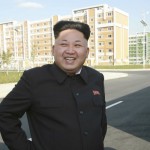 Today, photos surfaced on North Korean state media of Kim Jong Un visiting a housing development and a scientific academy, surrounded by smiling workers. However, no date was indicated on the photos, so it is unclear when the visit occurred. Kim noticeably appeared with a cane to support himself.

Last week, North Korean media reported he injured his leg while drilling with military officials. In still photographs broadcast by Pyongyang, Kim appeared sitting, once with a cigarette in his hand while his aides stood and once being driven in a green golf cart.

The elusive North Korean leader sparked rumors of a coup or worse by spending more than a month out of the public eye. Questions about his health and leadership only escalated when Kim missed a key political event and a parliamentary session last Friday. Read more.