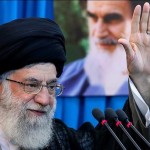 Ayatollah Khamenei told the 29th International Islamic Unity Conference this week, “The present U.S. officials are against the principles of Islam and, unlike their statements, they are after fomenting differences among Muslims; and its example is creating terrorist groups like Daesh (Islamic State) and other groups that have been created through the funding of the U.S. affiliates and their political aides; they (the Americans) have caused the recent tragedies in the Muslim world.”

he added that Muslims “should stand against these plots insightfully and by maintaining their resistance.”