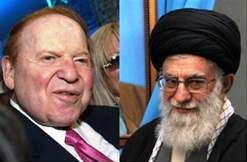 Iran’s Supreme Leader of the Islamic Revolution Ayatollah Seyed Ali Khamenei deplored the recent threat to Iran by Sheldon Adelson, the main donor of the US Republican Party, saying he should receive a slap in the mouth for calling on Washington to use nuclear weapons against Iran.

“If Americans are telling the truth that they are serious about negotiation, they should slap these prating people in the mouth and crush their mouths,” Ayatollah Khamenei said, addressing a large number of Iranian school and university students in Tehran on Sunday on the threshold of November 4, the anniversary of the US embassy takeover in Tehran back in 1979.

“A government (the US) which is under the illusion that it is responsible for world and nuclear issues doesn’t have a damn right to pose nuclear threat to another country,” he underlined.

“Today, Americans care the most for the decadent Zionist regime and circles because the (US) administration and Congress are dominated by powerful capitalists and Zionist companies…, but we are not forced to treat them with care,” Khamenei said.

“We have said since the very first day (of the Islamic Revolution), and we do say it now and we will say it in future as well that that we believe the Zionist regime is an illegitimate and bastard regime,” he added.

The Iranian Supreme Leader’s remarks came after billionaire Sheldon Adelson told a crowd at Yeshiva University in New York late in October that the only proper negotiating tactic with Iran would be fire a nuclear missile at the country and threaten to wipe out the entire population of Tehran, the nation’s capital.

Adelson, the largest donor to the Republican Party and its affiliated groups, made the comments during a panel discussion hosted by Rabbi Shmuley Boteach, Wall Street Journal columnist Bret Stephens and Yeshiva University President Richard Joel. Adelson’s remarks were videotaped by Philip Weiss of the news site Mondoweiss:

What are we going to negotiate about? I would say “Listen, you see that desert out there, I want to show you something.” … You pick up your cell phone and you call somewhere in Nebraska and you say, “OK let it go.” And so there’s an atomic weapon, goes over ballistic missiles, the middle of the desert, that doesn’t hurt a soul. Maybe a couple of rattlesnakes, and scorpions, or whatever. Then you say, “See! The next one is in the middle of Tehran. So, we mean business. You want to be wiped out? Go ahead and take a tough position and continue with your nuclear development. You want to be peaceful? Just reverse it all, and we will guarantee you that you can have a nuclear power plant for electricity purposes, energy purposes.”

The comments came in response to questions about the recent diplomatic detente between the United States and Iran as the two sides seek an agreement over the Islamic Republic’s nuclear program and an end to the economic sanctions imposed on the country.

In the 2012 election Adelson and his family gave more than $100 million to super PACs and other groups supporting Republican candidates. He held high-dollar fundraisers for Republican presidential nominee Mitt Romney and even accompanied Romney when he traveled to Israel during the campaign.