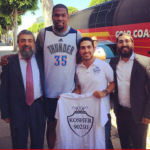 Basketball star Kevin Durant received a “triple rabbi blessing” on Thursday just hours before he led his team, the Oklahoma City Thunder, from 16 points behind to a 104-98 Game 6 victory against the Los Angeles Clippers.

Durant scored a whopping 39 points, 16 rebounds, and five assists in the game, advancing his team to the Western Conference finals.

Durant’s pre-game blessing was bestowed by three rabbis who hosted the NBA athlete and his team for training at their Jewish Education Movement (JEM) Community Center in Los Angeles.

“MVP Kevin Durant and his team received a triple rabbi blessing from the founder of JEM, Rabbi Hertzel Illulian, Rabbi Yossi and Rabbi Benjamin Illulian from the JEM Center and Kosher 90210,” the center posted on Facebook.

The center also published a photo of Durant posing with the three rabbis, as well as shots of Thunder players practicing on the basketball court.

While Durant’s team looked defeated early on in Thursday’s game, as they struggling to find the net, Durant’s dominance on the court carried them to an impressive victory.

In a post-game interview, however, Durant gave no credit to the rabbis.

“Experience has helped us out a lot, just being with each other for so long,” Durant said. “We’ve got a long ways to go. We definitely can get better. This is definitely a series that pushed us to the brink. We were in a tough spot. We stayed together and persevered.”