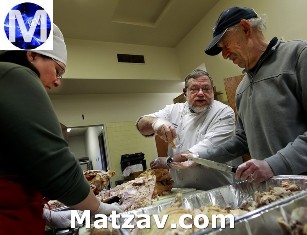 For the twelfth year in a row, Kesher Israel Congregation of Harrisburg, Pennsylvania prepared and served a full Thanksgiving meal (this year’s even included delicious latkes and jelly donuts in honor of Chanukah!) to Harrisburg’s on-duty firefighters. In 2010, this program was expanded to include Harrisburg’s on-duty police officers as well. Rather than spending Thanksgiving at home with family and friends, these hard-working local heroes were on call keeping our neighborhoods safe. Sharing a full Thanksgiving feast with them is KI’s annual way of expressing its appreciation for their efforts on our behalf.

KI began this Thanksgiving program at the suggestion of Rabbi Dr. Chaim Schertz and Mark Powers in 2001. This effort followed the devastating attacks of 9-11 that occurred just months before. The loss of so many heroic firefighters that day caused the nation to realize how much those previously unsung heroes were willing to sacrifice for the public’s sake.

KI’s Thanksgiving program has attracted much attention outside of Harrisburg. Many other congregations and Jewish organizations have contacted KI to learn how they could bring this project to their own communities. In fact, last year, the Orthodox Union encouraged all its affiliated synagogues to emulate KI’s Thanksgiving tradition.

As in past years, this heart-warming program was made possible by many volunteers and sponsors who generously gave of their time and resources — most notably, our friendly Linglestown Rd. Giant which donated seven frozen Empire turkeys.

Preparing and serving a full Thanksgiving feast for 70 plus appreciative local heroes took a lot of work and Matzav.com recognizes everyone who joined in making this program possible.