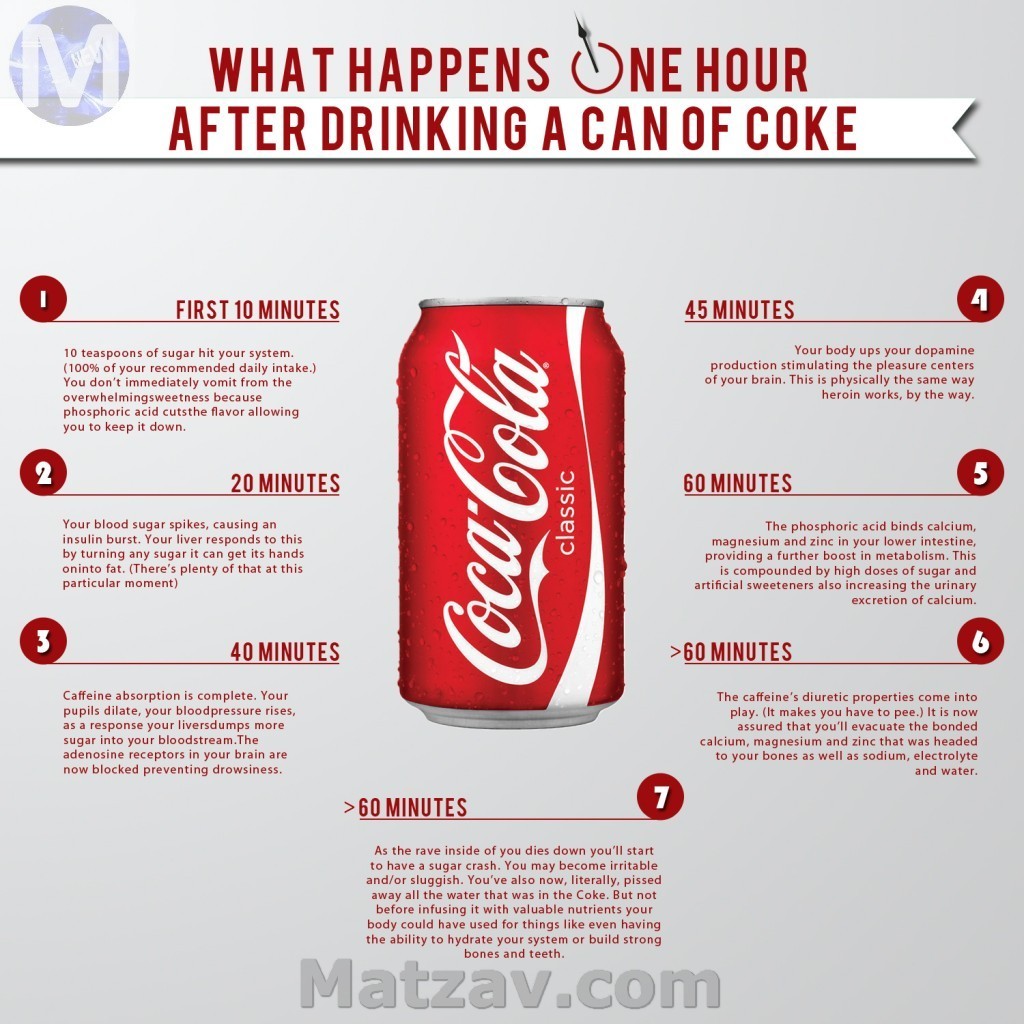 A graphic that reportedly breaks down the effects a can of Coca-Cola has on a person’s body is going viral.

The graphic – titled “What Happens One Hour After Drinking A Can Of Coke” – was first posted by The Renegade Pharmacist.

The graphic claims to detail what happens to the body after 10 minutes, 20 minutes, 40 minutes, 45 minutes and 60 minutes.

1. In The First 10 minutes: 10 teaspoons of sugar hit your system. (100% of your recommended daily intake.) You don’t immediately vomit from the overwhelming sweetness because phosphoric acid cuts the flavor allowing you to keep it down.

2. 20 minutes: Your blood sugar spikes, causing an insulin burst. Your liver responds to this by turning any sugar it can get its hands on into fat. (There’s plenty of that at this particular moment.)

3. 40 minutes: Caffeine absorption is complete. Your pupils dilate, your blood pressure rises, as a response your livers dumps more sugar into your bloodstream. The adenosine receptors in your brain are now blocked preventing drowsiness.

4. 45 minutes: Your body ups your dopamine production, stimulating the pleasure centers of your brain. This is physically the same way heroin works, by the way.

5. 60 minutes: The phosphoric acid binds calcium, magnesium and zinc in your lower intestine, providing a further boost in metabolism. This is compounded by high doses of sugar and artificial sweeteners also increasing the urinary excretion of calcium.

6. >0 Minutes: The caffeine’s diuretic properties come into play. It is now assured that you’ll evacuate the bonded calcium, magnesium and zinc that was headed to your bones as well as sodium, electrolyte and water.

7. >60 minutes: As the rave inside of you dies down you’ll start to have a sugar crash. You may become irritable and/or sluggish. You’ve also now have gotted rid of all the water that was in the Coke. But not before infusing it with valuable nutrients your body could have used for things like even having the ability to hydrate your system or build strong bones and teeth.

A recent Gallup Poll finds that 48 percent of Americans drink soda on a daily basis.