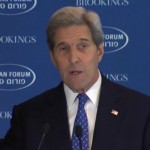 Secretary of State John Kerry warned today that the current trends in the Israeli-Palestinian conflict were leading to a one-state solution, and said Israel would not be able to maintain its Jewish and democratic nature in such a reality.

Speaking at the Saban Forum at the Brookings Institution in Washington, DC, Kerry also warned Israel about the dangers of the possible collapse of the Palestinian Authority. He said such an event would lead to a situation that would threaten the security of both Israel and the Palestinian people.

Kerry excoriated Israeli building in Area C of the West Bank as increasing Palestinian disillusionment and distancing the prospects for a two-state solution. In pointed remarks, Kerry called out Israeli government ministers who have voiced skepticism toward a two-state solution.

“The status quo is simply not sustainable and the fact of the matter is that current trends, including violence, settlement activity, demolitions, are imperiling the viability of a two-state solution,” Kerry warned. “And that trend has to be reversed to prevent this untenable one-state reality from taking hold.”

Kerry, who was criticized this fall for seeming to assert a connection between settlement growth and the recent upswing in terror attacks against Israelis, emphasized that although “settlements are absolutely no excuse for violence — and we are clear about that,” at the same time “continued settlement growth raises honest questions about Israel’s long-term intentions and will only make separating from the Palestinians much more difficult.”

“I can’t stress enough that the terror attacks are devastating the hopes of Israelis who want to believe that peace is possible and the violence must stop,” Kerry emphasized, “but Palestinian hopes are also being dashed by what they see every day. They’re focused on a reality that few others see – that the transition to greater Palestinian civil authority contemplated by the Oslo process has in many ways been reversed.”

Kerry said the Palestinian leadership must do more to prevent and combat anti-Israel violence. But he also said that Israeli leaders cannot allow the Palestinian Authority to disintegrate. If that happens, Kerry said, Israel would be forced to assume all governance in the West Bank and potentially accept a one-state solution that would compromise Israel’s future as a democratic Jewish state.

“Nearly all of Area C, which comprises 60 percent of the West Bank, is effectively restricted for any Palestinian development, much of it claimed for Israeli state land or settlement councils,” Kerry told attendees.

“We understand there was only one Palestinian building permit granted for all of area C for all of last year and settler outposts are regularly being legalized while demolition of Palestinian structures is increasing. You get it?

“Some officials in Israel have reportedly argued that it may not be in Israel’s interest to have a Palestinian Authority,” he said. He added that he knew that Prime Minister Benjamin Netanyahu had acknowledged the importance of having the Palestinian leadership remain intact, but noted that “circumstances force us to consider [the collapse of the Palestinian Authority] seriously because there are valid questions as to how long the PA will survive if the current situation continues, mark my words.”