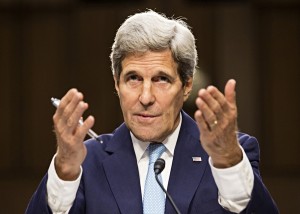 Secretary of State John Kerry is facing criticism from Israeli politicians for comments that have been perceived as linking the Israeli-Palestinian conflict with the fight against the Islamic State terror group.

“As I went around and met with people in the course of our discussions about the [coalition against Islamic State], the truth is there wasn’t a leader I met with in the region who didn’t raise with me spontaneously the need to try to get peace between Israel and the Palestinians, because it was a cause of recruitment and of street anger and agitation that they felt-and I see a lot of heads nodding-they had to respond to,” Kerry said at a State Department ceremony honoring the Muslim holiday of Eid al-Adha.

Israeli Economy Minister Naftali Bennett (Habayit Hayehudi) said, “It turns out that even when a British Muslim beheads a British Christian, there will always be someone who blames the Jews. We don’t justify terrorism, we fight terrorism. Kerry’s statement is a boost to global terrorism.”

“It is only Palestinian rejectionism and incitement which are continuing to thwart all attempts to resume negotiations. Does anyone truly believe that the Islamic State war criminals will cease their atrocities and abandon their vision of an Islamic state just because Israeli-Palestinian peace talks are renewed?” said Israeli Communications Minister Gilad Erdan (Likud).

“It’s something that presidents of both parties for decades have said, that if we could make progress on Middle East peace, that would help create a more stable region, and the secretary was agreeing with what has been said publicly,” Harf said.