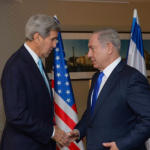 Secretary of State John Kerry urged Israeli Prime Minister Bibi Netanyahu to move “beyond the rhetoric” and to take steps to “rekindle” the peace process with the Palestinians during a meeting between the two leaders in Berlin.

“It’s very important to settle on the steps that can be taken that take us beyond the condemnations, beyond the rhetoric,” Kerry said. “It is absolutely critical to end all incitement and all violence and find the road forward to build the possibility that is not there today for a larger process.”

Netanyahu told Kerry that the current violence is “driven directly” by incitement from Hamas, the Islamic Movement, and the Mahmoud Abbas-led Palestinian Authority.

“I think it’s time for the international community to say clearly to President Abbas: Stop spreading lies about Israel,” Netanyahu said, referring to rhetoric by Abbas that Israel is seeking to change the status quo on the Har Habayis.

Netanyahu also said that Israel is committed to maintaining the status quo on the Har Habayis and protecting all of Israel’s holy sites.

“We remain committed to the status quo. We’re the ones that protect all the holy sites. And Israel is acting to protect its citizens as any democracy would in the face of such wanton and relentless attacks,” Netanyahu said.

Following his meetings in Berlin, Kerry will head to Amman, Jordan, to meet with King Abdullah and Abbas.