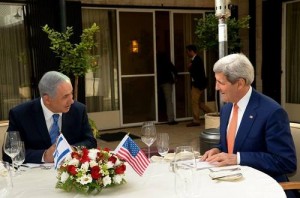 Secretary of State John Kerry met with Israeli Prime Minister Bibi Netanyahu as well as President Reuven Rivlin on Tuesday in Yerushalayim. The leaders discussed the ongoing wave of Palestinian terror in Israel, in addition to concerns over security issues related to Syria and Islamic State.

“Clearly, no people anywhere should live with daily violence, with attacks in the streets, with knives or scissors or cars,” Kerry said prior to his meeting with Netanyahu.

“Regrettably, several Americans have also been killed in the course of these past weeks, and just yesterday I talked to the family of Ezra Schwartz from Massachusetts, a young man who came here out of high school, ready to go to college, excited about his future, and yesterday his family was sitting shiva and I talked to them and heard their feelings, the feelings of any parent for the loss of a child,” added Kerry, a former U.S. senator representing Massachusetts.

Also on Tuesday, Kerry told Rivlin, “Israel not only has the right to defend itself but has an obligation to do so. The United States will continue to stand with Israel in support of your desire to live in peace and stability, without that violence.”

Netanyahu told Kerry before their meeting, “You are a friend in our common effort to restore stability, security, and peace. There can be no peace when we have an onslaught of terror—not here or not anywhere else in the world, which is experiencing this same assault by militant Islamists and the forces of terror. Israel is fighting these forces every hour.”