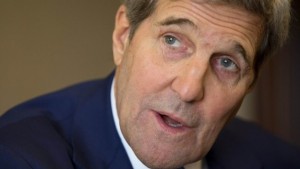 Secretary of State John Kerry called the bereaved parents of American terror victim Ezra Schwartz, 18, who was killed in a shooting attack in the West Bank last week, to express his condolences. Kerry made the call from Abu Dhabi, the first leg of his current Mideast tour which will bring him to Israel and the West Bank on Tuesday.

He told reporters before contacting Schwartz’s parents that there was no justification for Palestinian terror attacks against Israelis.

“Look at Ezra Schwartz, who got shot, and another young life cut short,” Kerry told reporters in Abu Dhabi, according to Reuters. “It happens almost every day over there and it’s terrible, and too many Israelis have been killed and stabbed, and too many Palestinians. And there’s no excuse for any of the violence. There’s just no rationale. Even if you’re unhappy and you’re disappointed in the lack of whatever the political horizon is, whatever, violence is not the solution.”

Schwartz, a yeshiva student from Sharon, Massachusetts was laid to rest on Sunday, three days after he and two other people, including a Palestinian man, were gunned down in Gush Etzion, south of Jerusalem, last Thursday. Kerry served for almost three decades until 2013 as a US senator from Massachusetts.

Kerry is scheduled to arrive Tuesday to meet Prime Minister Bibi Netanyahu and Palestinian Authority President Mahmoud Abbas in an effort to calm the wave of deadly Palestinian terror and violence that show no signs of dissipating. It will mark his first visit to Israel or the Palestinian territories in more than a year.

“This is an effort to see if we can get some concrete steps in place – begin to build them, maybe – that could calm things down a little bit so people aren’t living in absolute, daily terror that they might be stabbed or driven into or shot trying to walk around their city,” Kerry said.

His visit comes amid nearly two months of violence, including dozens of near-daily Palestinian knife, gun and car-ramming attacks.

He told reporters that Washington was “perfectly prepared to work and [has] ideas for how things could proceed” to quell the wave of violence, but, warned that “People aren’t in the mood for concessions.”