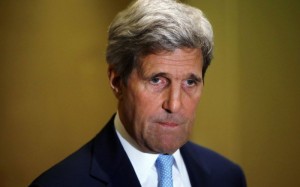 Secretary of State John Kerry said today that a watchdog’s report that concludes Syria used chlorine in attacks on three villages raises “serious questions” about the regime’s compliance with the Chemical Weapons Convention and a United Nations Security Council resolution.

“The OPCW’s [Organisation for the Prohibition of Chemical Weapons] Fact-Finding Mission investigating chlorine use in Syria recently released a second interim report that concludes with a high degree of confidence that chlorine was used as a weapon ‘systematically and repeatedly’ in attacks on three villages in northern Syria earlier this year,” Kerry said in a statement.

“The report cites witness accounts indicating helicopters were used in the attacks-a capability the opposition lacks. This strongly points to Syrian regime culpability,” he added.

“We believe there is evidence of Assad’s use of chlorine,” Kerry testified before the House Foreign Affairs Committee.

Chlorine gas is not on the list of chemicals Syria declared to the international community, but Kerry said its use is prohibited by the Chemical Weapons Convention.

The new report raises questions about the Syrian regime’s willingness “to continue using chemical weapons to kill or injure the people of Syria,” Kerry said in Sunday’s statement.

Kerry said the report, coupled with Syria’s declaration to the OPCW, raises “especially troubling concerns that continued chemical attacks on the Syrian people by the regime could occur.”

“The United States is gravely concerned about the findings in this report, which point to a violation of the Chemical Weapons Convention,” he added. “The Assad regime must know that it will be held to account for such use in the international community.”