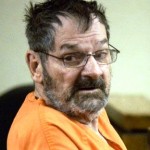 Frazier Glenn Cross was sentenced to death on Tuesday for the 2014 murders of three people at two Jewish centers in Kansas.

A jury had already recommended the death sentence for him but the judge made it official today.

Cross, who is a white supremacist, wanted to kill as many Jews as he could when he shot the victims. Read more at KMBC.