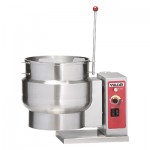 The Mechaber (Shulchan Aruch Y.D. 103:7) writes that if water is cooked in a basar b’chalav pot while it is still a ben yomo, not only does the water become assur, but we restart counting the 24 hours1. Rema extends this halacha to all issurim. The reasoning for this is because there is a new bliyaof issur, either because of ChaNaN (Mechaber and Rema) or because of nat bar nat d’issura (Shach). However, according to either opinion, if the pot is empty, even if it is heated, we would not restart counting the 24 hours, since there is no new bliya of issur.

Example: We must always wait 24 hours before kashering a spray dryer, so that it will be an aino ben yomo. However, if the company wants to heat the dryer, after it has been cleaned and dry, this will not restart the counting of the 24 hours.

What about a steam jacketed kettle? If the steam is turned on during the 24 hours, does this also restart the clock?  What makes this question all the more relevant is that when there is a shas ha’dchak, we allow kashering keilim while they are still ben yomo. This is accomplished using a davar ha’pogem by means of a double kashering. This means that the kettle/kli is first kashered with roschim water that is pagum, and then kashered a second time with plain roschim water. The bliyos of issur are expelled into the pagum water and become batel. A second kashering is done, sincelichatchila one should only kasher with plain water. If one is able to add a davar ha’pogem to the steam, the jacket will be kashered as well. However, if only plain steam is available for the kashering, can this be permitted, since the steam will absorb ta’am issur from the jacket and get reabsorbed? Won’t the jacket remain non-kosher?

However, there is a sevara to be maikel to allow kashering the steam jacket of a kettle even when it is still a ben yomo, even without pagum steam. This is because Igeros Moshe (Y.D. Chailek II:31) writes that  in situations where we do not say ChaNaN, one can kasher ben yomo using a double kashering even without a davar ha’pogem. This is because each kashering reduces the bliya. Although some issur will get absorbed back into the kli, after two kasherings we assume that the bliya is sufficiently reduced to become batel.  Regarding the steam jacket, there is a safek whether any bliyacan penetrate through the walls of the kettle into the jacket2. Poskim write that we do not say ChaNaN lach b’lach b’sha’ar issurim when there is onlysafek issur3. Therefore, kashering the jacket twice will reduce the bliya in the jacket to the point where it can be batel. Although, lichatchila one should make every effort to only kasher after 24 hours, or at least to add a davar ha’pogem to the steam, but if this is not possible, then one can kasher a steam jacketed kettle with a double kashering (with a davar ha’pogem), even though the steam does not have a pegima. (Of course, the source of the steam itself must be kosher).

1. Mechaber writes that this also provided that there was no li’nas ley’la.