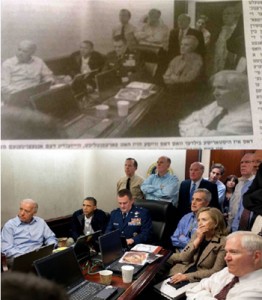 If Hillary becomes president, the frum newspapers had better not photoshop her out of pictures. She will get quite angry.

How do we know?

Because a new batch of emails released from the State Department today shows that Hillary Clinton was angry about being photoshopped out of an iconic 2011 photo in the Situation Room.

At the time, Der Zeitung, a Chassidishe New York newspaper, published the picture showing the Obama administration officials watching the assassination of Osama bin Laden, but the newspaper chopped out Hillary.

In an email, Hillary, wrote, “The Jerusalem Post reported today that a NY Hasidic paper Der Zeitung published the sit room photo w/o me (or Audrey T) photoshopped out perhaps because no woman should be in such a place of power or that I am dressed immodestly!!”

In a responding email, Judith McHale, Under Secretary of State for Public Diplomacy and Public Affairs, wrote, “Stunning!!! Bare minimum I hope the WH formally objects. This is so frustrating and depressing. I’m increasingly coming to believe we are moving backwards again in terms of women’s issues.”

In a later email, McHale adds, “Do you want me to reach out to rhoades and ask him to formally complain ? WH photos are not supposed to be altered. I’m just so incredibly pissed off I want to do SOMETHING!! Let me know.”

Der Zeitung subsequently apologized for the incident, stating, “In accord with our religious beliefs, we do not publish photos of women, which in no way relegates them to a lower status. Because of laws of modesty, we are not allowed to publish pictures of women, and we regret if this gives an impression of disparaging to women, which is certainly never our intention. We apologize if this was seen as offensive.”

But the bottom line, we now know, is that Hillary found out about the photoshop and she wasn’t too keen about it.