​50 Years Later the Oil is Still Burning
By Yoshi Falber
The year was 1966 when a young Rabbi Nota Schiller decided to undertake an innovation which had never been attempted in the history of the Jewish people: to take those of Jewish lineage not yet convinced of the Sinai experience and to teach them. That is, to create an institution in the format of a ​Yeshivah, where young uninitiated Jews could come to understand the dialectic of the Jewish People over thousands of years of dispersion. Not as a spectator viewing from a distance, but as an insider, not as a tourist, but as a resident of the Beis Midrash, to feel comfortable, and to understand from within, to come back home.
In those years, members of the frum community were skeptical about the possibility of such a concept becoming a matter of fact. One of the notable exceptions was Rav Elyashiv ZT”L. Rav Schiller met with Rav Elyashiv and discussed this proposal at length and the latter subsequently penned a poignant and visionary letter of endorsement to him and his then partner R’ Noach Weinberg zt”l, encouragement, and support for the kiruv movement and his Yeshivah. Since Rabbi Schiller only wanted his innovation to be just that, not a deviation from tradition but an innovation from within tradition backed by Torah sources and Torah luminaries, he with this letter in hand now had all he needed to see his vision come to life. Ohr Somayach was born on the desk of Rav Elyashiv and In 1966 the doors of what would become Ohr Somayach opened. That is how the story went until those very doors were promptly closed due to the beating drums of the war in ‘67 when the holy letter was misplaced and went missing! It wasn’t until 1972 that the Yeshiva resumed.
Since then tens of thousand of students have, and continue to enter the walls of the Yeshivah to become bnei Torah and Talmidei Chochomim. With the blessings of the leaders of the generation, Ohr Somayach and it’s talmidim flourished, and so did the relationship between Ohr Somayach and these Torah giants of the generation. Rav Shach Zt”l came to speak at the Yeshiva and Rav Shteinman ZT’L spoke by the Yeshiva twice. Rav Shach was quoted saying to Rav Nota Schiller and others calling it a Makom Torah, Rav Steinman ZT”L was also very supportive and the relationship with Rav Elyashiv ZT”L always remained close. Once on an Ohr Somayach Mentors Mission, Rav Elyashiv reminded the Rosh Hayeshivah and the mentors present about the missing letter, recalling to them those pivotal early days of the Yeshiva’s inception. This was proudly and frequently relayed by Rav Schiller even though the letter remained lost, until something remarkable happened.
After the passing of Rav Elyashiv ZT”L a Sanzer Chossid sought to acquire hand written response from Rav Elyashiv’s archives concerning the great Sanz Dynasty. The Chossid, ​R’ ​Moshe Reich Z”L was offered a few other pieces of precious rarity from among his substantial acquisition. While carefully sifting through his remarkable and historic collection he happened upon a conspicuous find which he thought may interest his good friend Danny Lemberg, ​a membe​r of Ohr Somayach’s Executive Committee. He sent it over immediately and when Mr. Lemberg opened the letter he was astounded by what he saw: the stuff of legend and confirmation of years of klal work with the signed with a seal of approval from the Gadol Hador Harav Yosef Shalom Elyashiv!
After 50 years the oil in the lamp still burns brightly. Rav Elyashiv’s words and blessing had all come true and now we have merited to see the source of the success of the Ohr Somayach and the kiruv movement in its original form, born and drafted on Rav Elyashiv’s desk. Rav Elyashiv ends his letter stating: “any individual who lends his hand to this project and boosts the above mentioned rabbonim shlit”a counts himself amongst those who make a path for Hashem in the desert”. It is a kal v’chomer that if Rav Elyashiv said these words before Ohr Somayach ever existed, all the more so are these words true today as it must expand to meet the need of the generation. Ohr Somayach hasn’t been busy building buildings it has been busy building a movement and building klal Yisroel. Rav Schiller shlit’a noted that if it had been possible to run Ohr Somayach without money it would have been nice, though he hasn’t yet found a way, but although the alchemists of the middle ages busied themselves trying to turn brass into gold, Ohr Somayach too is in business, it turns gold into Neshamos.
Ohr Somayach International will be hosting its annual Charidy Event this Wednesday, December 12th. 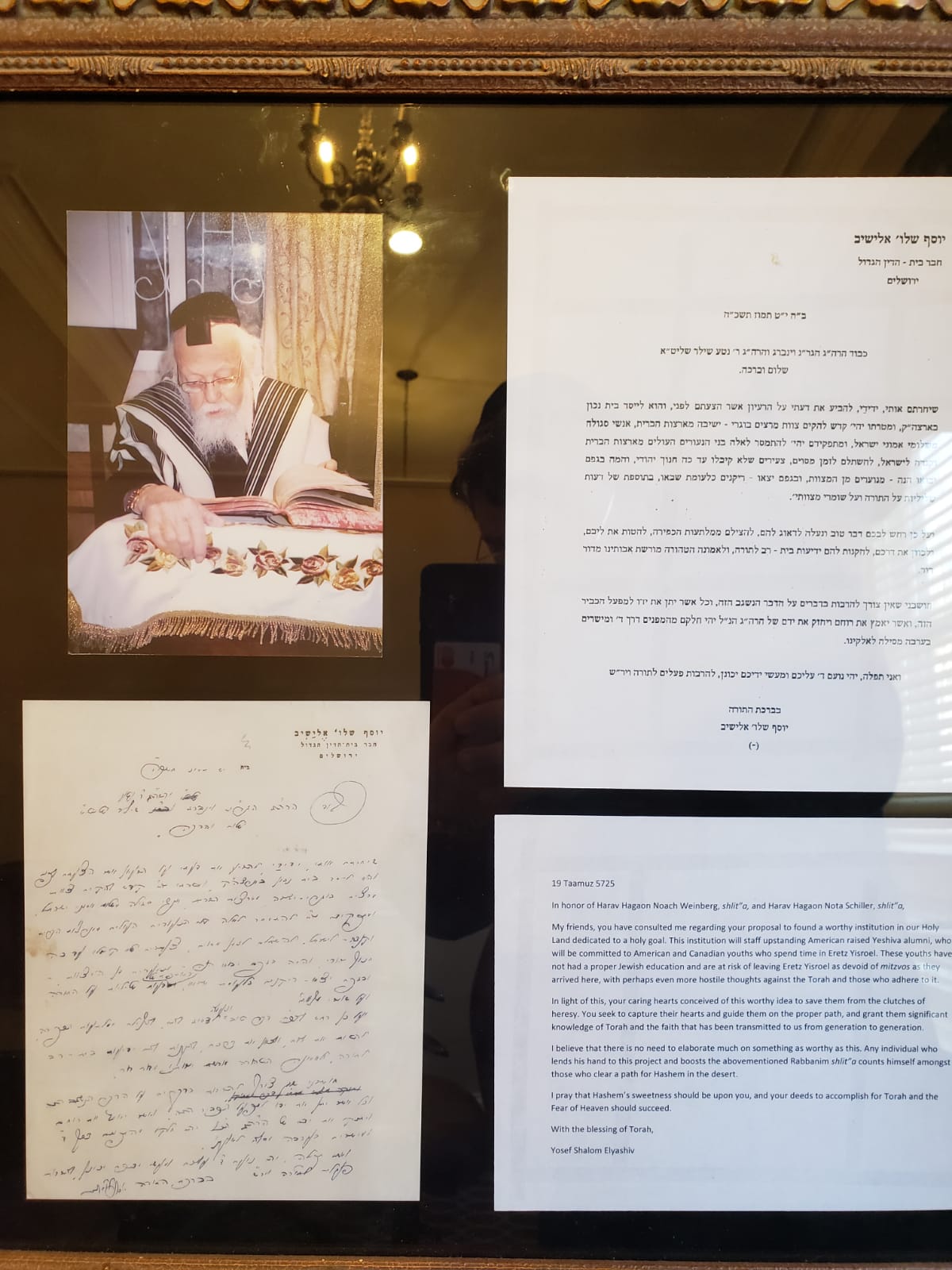 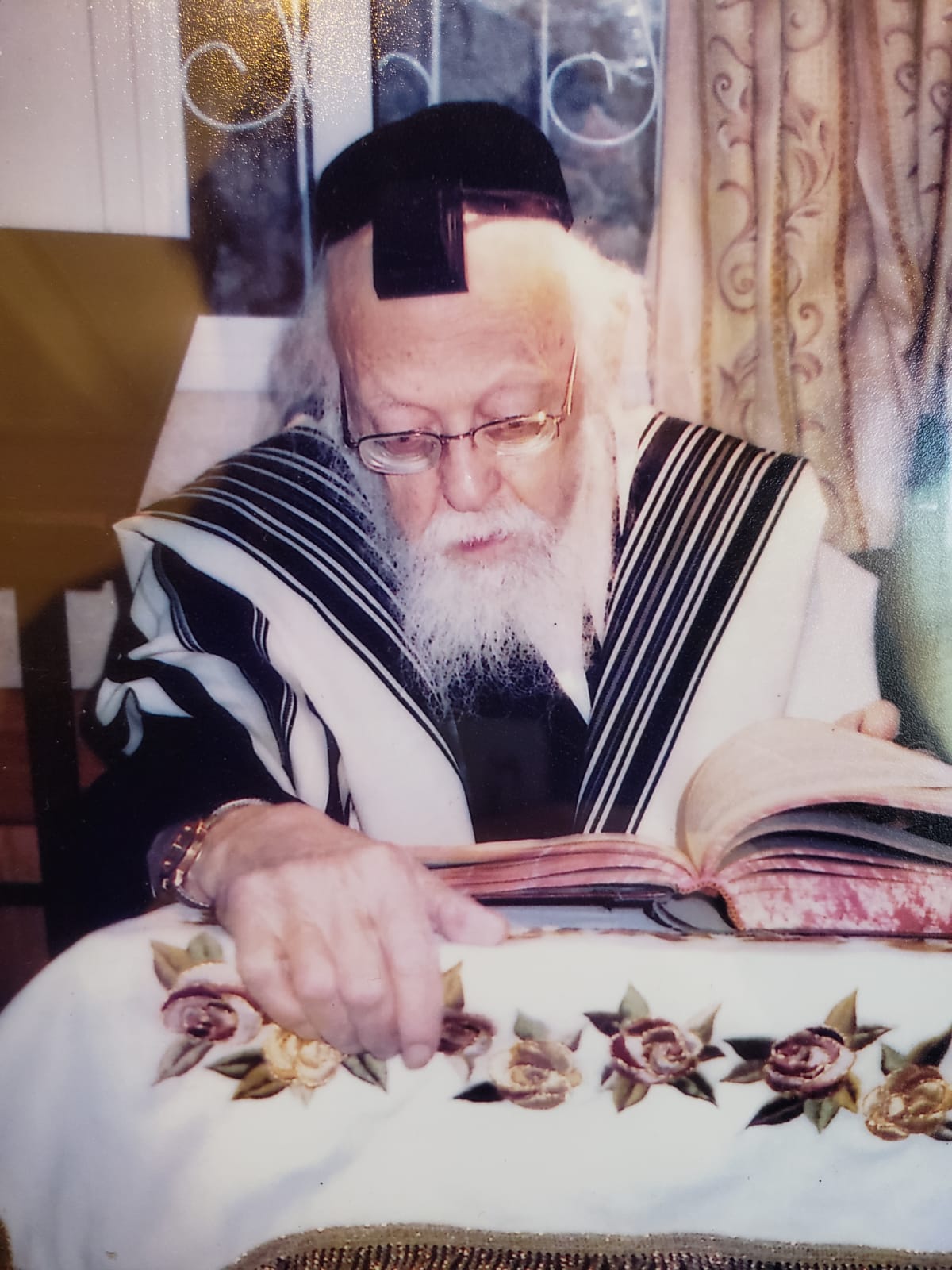 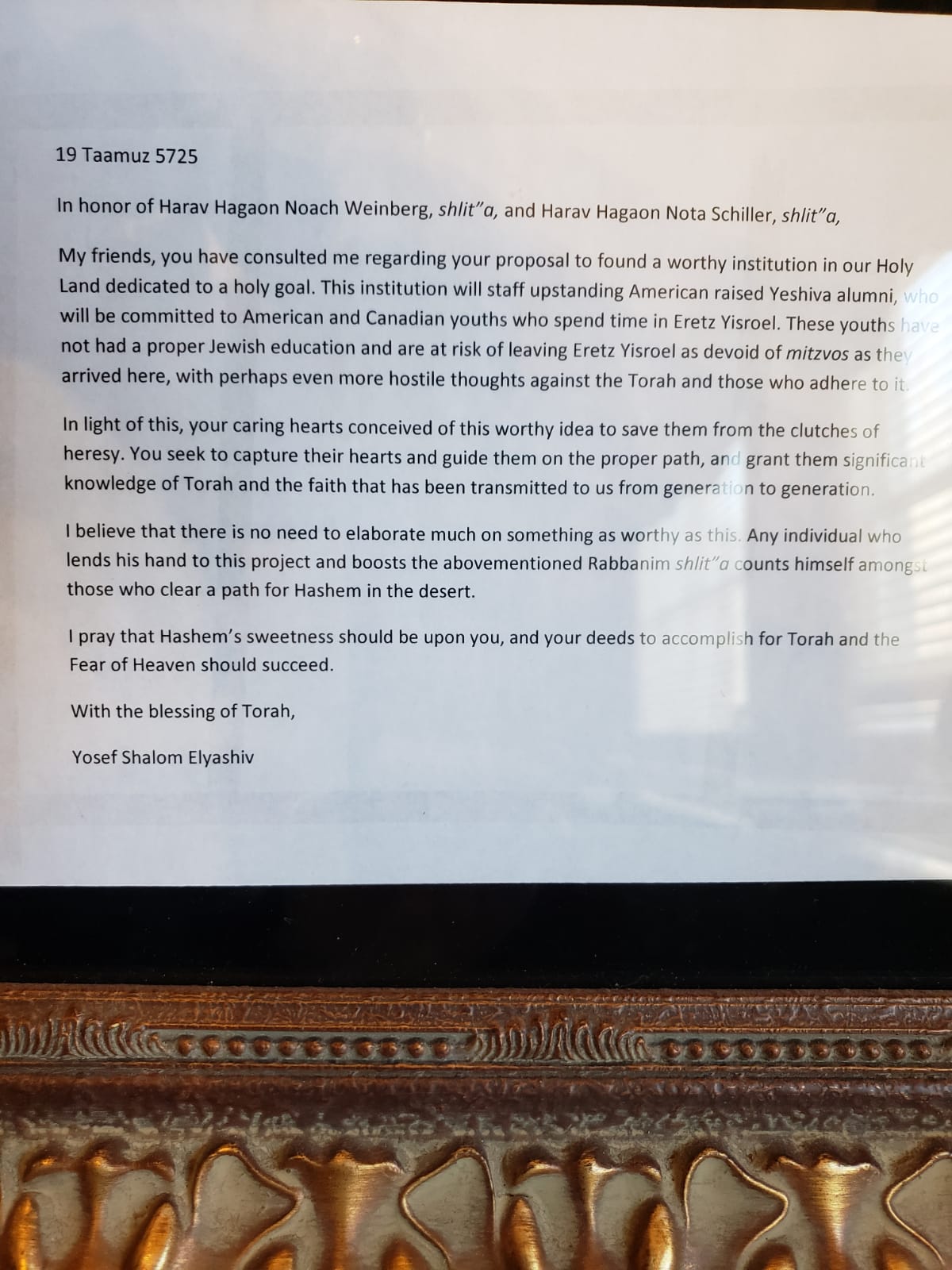 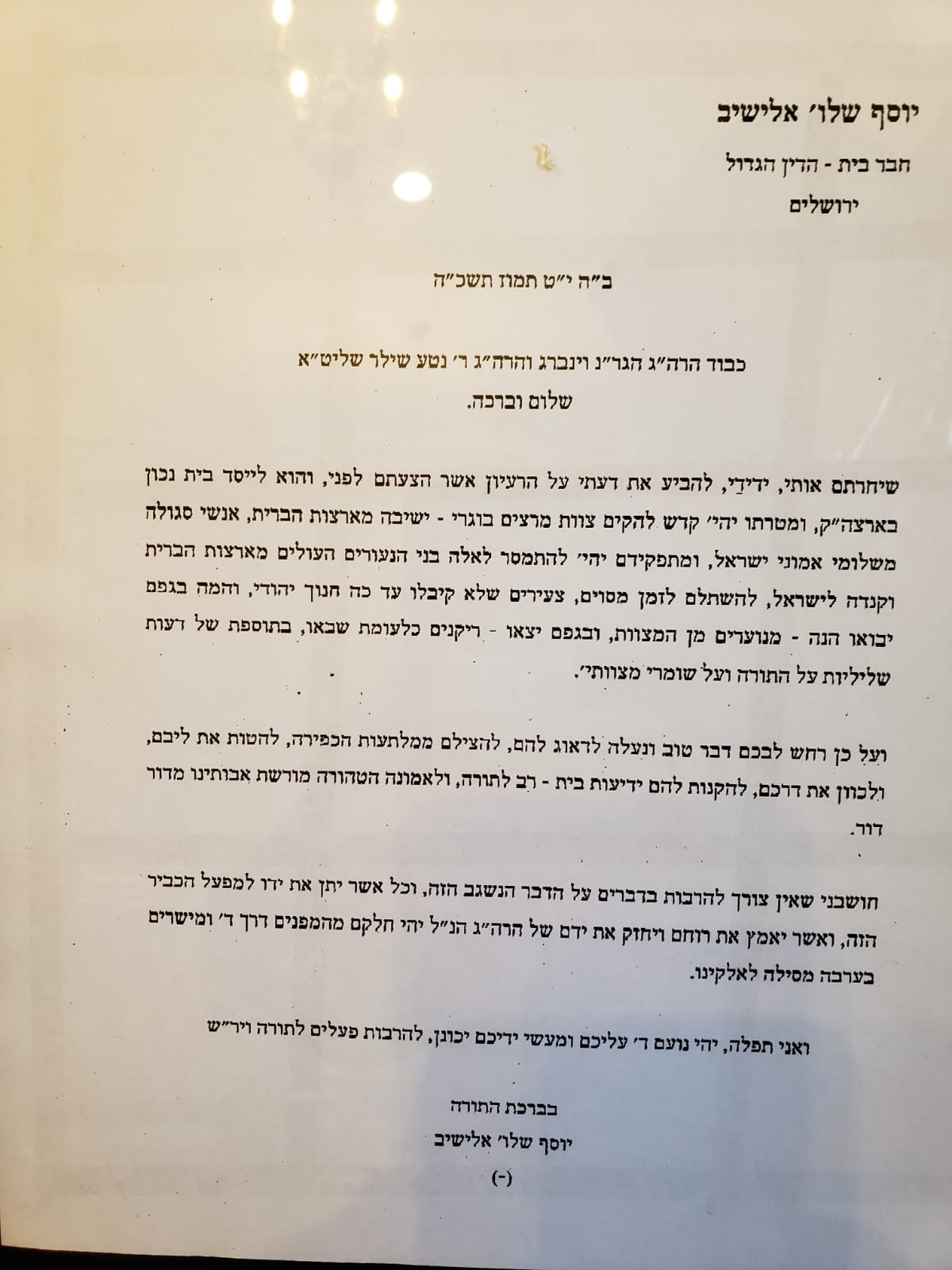 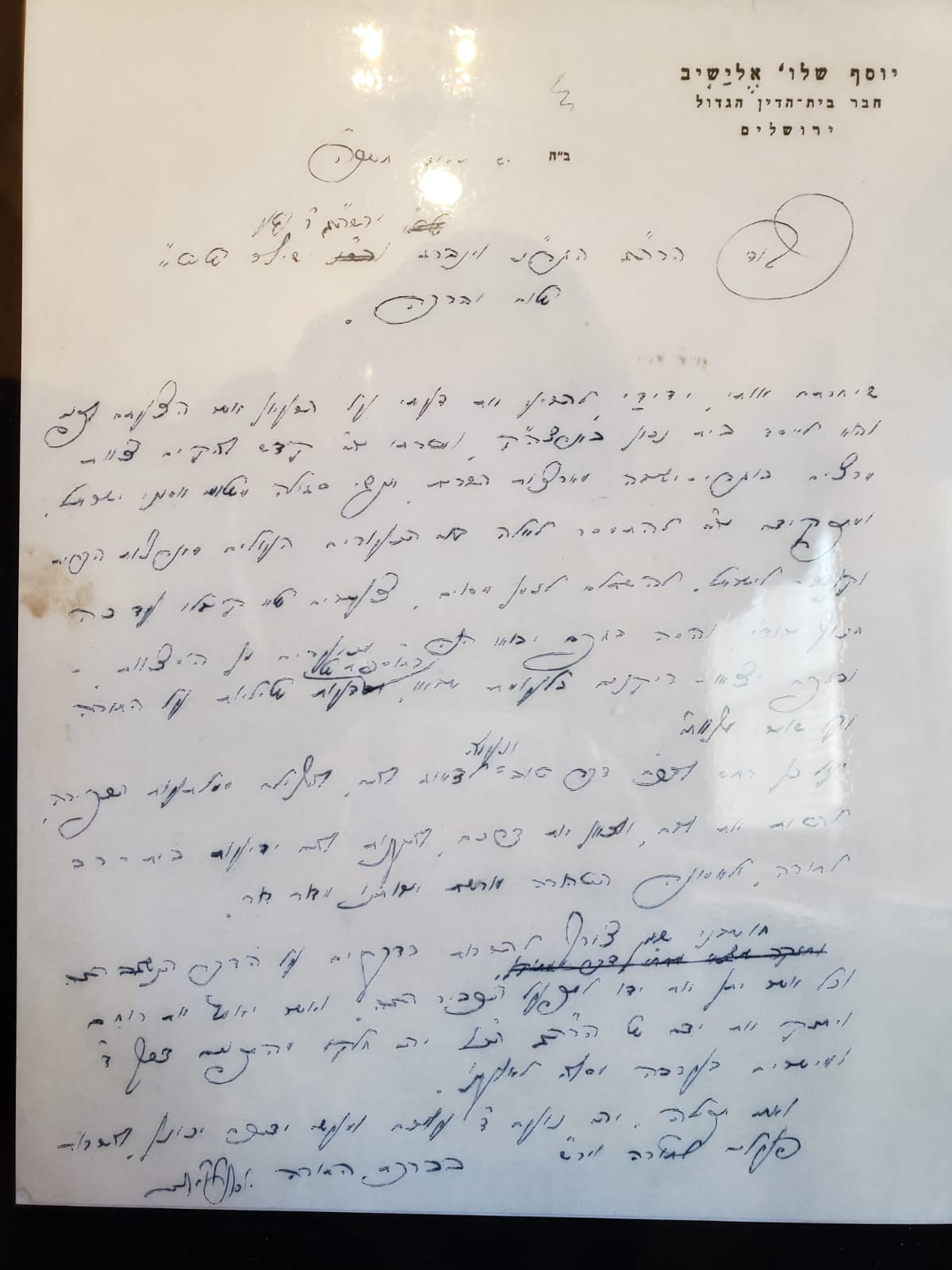