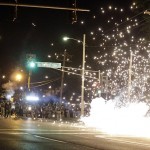 Today, a federal judge ruled that the Ferguson, Missouri police’s so-called “5 second rule” is unconstitutional. The rule enforced by some officers forced protesters to be moving at all times or be subject to arrest.

“The practice of requiring peaceful demonstrators and others to walk, rather than stand still, violates the constitution,” U.S. District Court Judge Catherine Perry wrote in the ruling.

Since the protests started in the aftermath of Michael Brown’s death, police have tried various tactics for crowd control, and introduced the “5 second rule” in mid-August. Read more at the Washington Post.